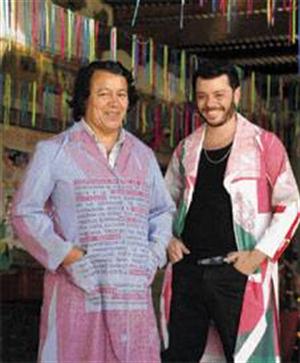 Martín Churba, an Argentine couture designer that has been called “fashion’s spoiled child” for his creative and innovative designs, was acclaimed once again in Buenos Aires Fashion Week when he presented his 2005 collection. What none of the critics knew was why that collection was so special for the designer. His most cherished pieces were the re-imagined lab coats, a “universal work icon” that, as the designer describes, can be equally worn by doctors, students and factory workers. The magic of these lab coats lies in its production. They were made by Cooperativa Barrio La Juanita (Cooperative La Juanita Neighborhood), a group of piqueteros, formerly unemployed workers, discriminated by society. Churba wanted to “make work fashionable” and got involved in one of the most successful design social interventions Argentina has seen. When the workers from La Juanita saw their products in fashion magazines they could not believe their eyes. After everything they had been through, the piqueteros were being featured in fashion magazines.

What made this project so successful? How was this possible? The workers from La Juanita were former piqueteros, unemployed workers who organized themselves to protest against the government, which had ignored them during the 2001 social and political crisis. They used to stage piquets and built barricades with burning tires blocking routes to fight for their cause. They differentiated themselves from other piqueteros because as a difference to the other groups they weren’t demanding social plans, they were demanding jobs. They created this association to generate jobs to survive Argentina’s economic crisis. Among their many entrepreneur projects they include a bakery, a kindergarden and computer recycling. They also printed books to tell their story of social struggle, but they still needed more sources of income.

In 2004, the cooperative got a donation of sewing machines from the Swiss embassy. The workers had the tools but not the knowledge to operate them, and even less the skills to design clothes. That is why they contacted Churba. At first, Hector “Toty” Flores, the leader of La Juanita, was a little bit apprehensive about Churba, fearing he would come with big ideas and impose them on the cooperative, he was afraid that he would not understand their struggle coming from a high-class environment. To their surprise, the famous designer turned out to be a very simple, accessible and down to earth person, with a strong social commitment. He also showed a profound respect for Flores and the workers, and their hard-working culture, something that some say has been eroded in Argentina in the last years. The mutual respect these two leaders had for each other was the key to the success of this project.

Churba showed a great commitment and, more importantly, he was willing to listen and appreciate the good work and effort of the cooperative. The partnership was possible because he contributed with the creativity and design knowledge and the workers from La Juanita contributed with a key element: trust, said the designer. But he earned their trust, by believing in their work, in their skills, in their ability to be productive and independent workers.

The project was one of the most important collaborations between the social and the design worlds in Argentina. Churba succeeded because he earned the trust of the workers from La Juanita, he got immersed in their culture, learned what they did best and did not impose himself to the workers. On the contrary: he understood and respected their values, believes and capabilities. Furthermore, he was able to transfer a set of skills to the workers, an invaluable feature in a social project. Today, he continues working with La Juanita, he is involved in some of the design work designing their Christmas packaging for their pannetone, and he visits them frequently and guides them whenever needed.

When implementing social design practices there is a key element that must be present and that is the collaboration with the community. I believe that trust is the key element that will make a project succeed or fail, and in order to achieve that the designer must immerse himself in that culture and most importantly believe in the people he is helping. There is a lot of innovation potential, many ideas coming from the community itself but to access those ideas trust is essential. If as designers our only mission is to impose our set of ideas believing that our formal education entitles us to do so, then the project will certainly fail. All that will be achieved is a sense of personal fulfillment for the designer but there will not be a real change but only some sort of “Humanitarian Imperialism,” as Bruce Nussbaum suggests. There will be a loss of resources and most importantly a wasted opportunity to help a community. With trust, socio-economic and geographical differences can be bridged, but for that understanding, respect and dialogue are needed.

– Bruce Nussbaum, “Is humanitarian design the new imperialism? Does our desire to help do more harm than good”, The Design Observer Group, July 7, 2010