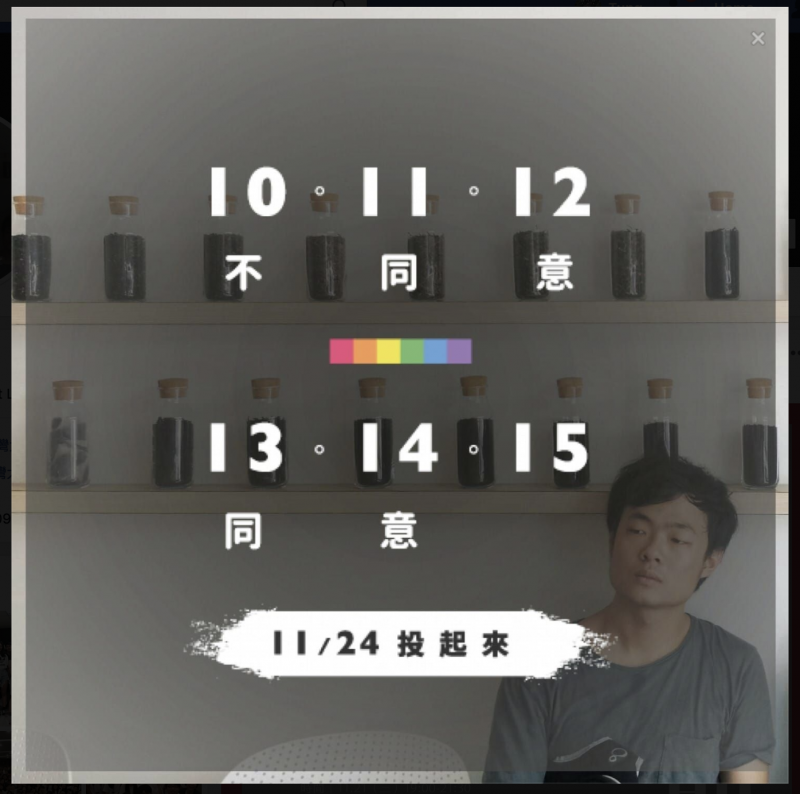 At the end of this month, Taiwanese citizens will vote on 10 referendums. As a democratic country, the Taiwanese people will express their opinions on public matters includes energy generation, gender equity and rectification on the country’s name. Before the vote, some citizens participate in public discourse, which now occurs mostly on the Internet. Social media platform, like Facebook, become one of the most important channels of political communication. According to a report on Pew Research in 2011, stronger than 30% of social media users have shared their opinions on political and social matters. It also points out, more than 20% of citizen follows politicians on social media.

People read a piece of news online. They can easily express their positions as well. Writing a post which a user can generate the content on his/her own is an excellent way to elaborate personal perspective more completely. If people don’t have such strong and sound argument, they can just click on “like” or forward a post –no matter it is a text, a video or a meme — which they think that could nicely convey their thought. Besides, Taiwanese people play with Facebook’s new feature, which allows users to add a frame on the profile picture. For example, a Facebook user, who agree with referendum no.13 to 15, and disagree with no. 10 to 12, created a frame to marks a set of the number that she agree or disagree with, and then shared her frame to the public. Anyone who shares the same position with her can merely apply that frame.

As a designer, I consider that using a profile picture to show one’s position is a tangible way to advocate a point of view. However, I doubt that if communication design contributes to citizen political participation and the following are three aspects what I observed–

First of all, these framed pictures show that “There is a position that I want the public to recognize.” It can be seen as online activism because it demonstrates an act what activism always do: a group of people takes to the streets and shout out slogans to convey a proposal with a few words concisely. Being online activism is not a problem. The problem is that those slogans don’t accommodate any space for discussions which social media platform initially purpose to create. What it gives is an informative announcement, not an invitation to open up a dialog. They are seeking followers but not interlocutors.

I noticed that some fan page started working with designers to increase the visibility of each post. To catch up with instant updates and considerable wording of information, designers apply flat design to produce more posts per time. The vivid color palette attracts users’ eye and feeds them with info well-designated. However, designers still only serve for the majority, even though each person have access to the Internet equally in Taiwan, it is still hard to find voices from the minority. For example, there are just a few types of frames generated and uploaded, it merely represents the opinions that the majority of Internet users hold. The design work doesn’t reflect the high diversity of Taiwan has, Han-people-centered perspective is almost the all we can hear.

Secondly, on the Internet, users are most likely to browse posts which they potentially agree with. Still, attention is not enough, political participation requires discussion heterogeneity which is mostly filtered out by the algorithm. Nowadays, a growing number of entertaining political posts occupy most page space online. People prefer to read and react faster, and that is entirely not helpful for civil discourse. However, a user-centered design principle of most social media platform is meant to encourage those oversimplified but fun information spread out.

Thirdly, consider media literacy and other required skills for public discourse online, I found that people complain a lot about the difficulties of communication. Some people point out that real conversation only occurs when both sides can understand what each other say. Lack of willingness to listen is the most common barrier. The misunderstanding for a message from one side might enhance a sense of distrust and decrease the motivation to hold on a conversation. When a feeling of distrust comes up, it might trigger other negative, intense emotions which make communication harder.

How might we assist with an inclusive dialog amongst different perspectives? For a better understanding of the role of design can be, I expect that I can see the further insights from this upcoming referendums. I am curious about how might design create a way for people to aware that they are different and real communication is necessary before they make any decision individually and collectively.