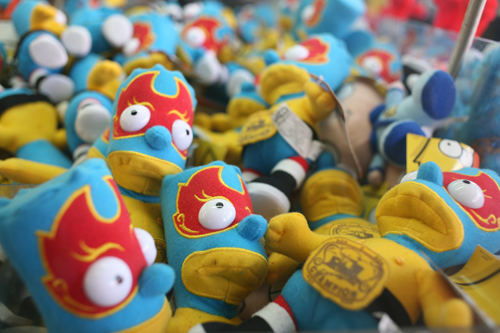 A visual audit can be performed across a specific ideology, environmental signifier, organizational culture, or even a specific human behavior. Designers often use visual research as a tool to “get a feel” for the local patterns, or identifying problematic areas of a site-specific context. From our first visual audit I found that visual audits can act as a generative tool for designers to begin to discuss and reflect on various patterns that arise from the data. This time the visual audit was done in Coney Island. We set out in search of symbols, patterns, and repeating themes, to visually document not simply what is Coney-esque, but to also explore new ways of sensing the city around us.

Before performing the audit, we also read a few texts to help frame our research project and intended outcomes, employing a combined depth-first and breadth first approach to design research. Our readings included Rem Koolhaus’ Delirious New York, as well as Space, Time, and Architecture by Jilly Tragnou and Miodrag Mitrasinovic and The Tourist: A New Theory on the Leisure Class by Dean MacCannel. Each of these texts discusses post-modernity’s homogenizing tendencies resulting in an environment of warring symbols, signifiers, and intent where the notion of cultural authenticity has reached its deathbed. What became interesting to explore is how we could begin to deconstruct these signifiers within the urban environment. Criticisms of the theme parks and their totalizing tendencies offered a holistic perspective of urban developments, but could we possibly offer alternative ways at looking at these overthemed environments to stimulate a counter-narrative that could still be creative? Our research question became “Can the process of visual research be generative in exploring new ways of looking at the city?” 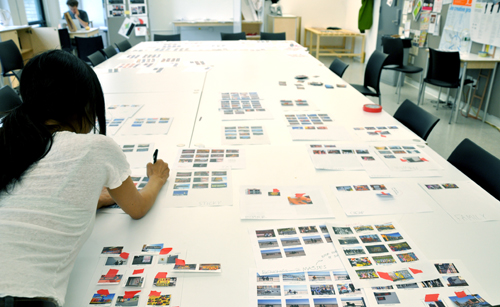 We sought out to introduce a more structured process by planning various intermediary steps, while allowing some freedom for opportunistic behavior, since this is what designers like to do—deviate from methodological processes (there are studies on it!) This is not to say that structured processes and opportunistic behavior can’t go hand in hand. By loosely planning out our visual audit, we were able to set objectives for the audit while allowing for more opportunistic tactics to live—allowing for a game of Spark! ® which allowed us to brainstorm, identify intuitive patterns, and key assemblages. Every game has its rules and structures to follow, so building in processes that call for  ‘restricted play’ can inform our designerly ways of knowing.

Another stigma common to designers is our ability to be fixated with a common theme or underlying principle or an attachment to a concept. Studies haven’t shown any damaging evidence to this designerly characteristic, though I would argue that it can be a hinderance in a group setting. Our fixation with the visual audit ended up being humor and irony–how we categorized our data (photos) became a critical part of the process, and the length of laughter and intensity of our reactions became a measurement of how successful our codification process was.

The more eyes, the better.

While we both believe that a visual audit can be successfully done alone, collaborating on the visual audit offers even greater insights, perspectives, and interpretations on the data. An additional set of eyes can assist in many ways such as making sure that the data is as objective as possible. On the other hand, it may be more useful to show the visual research in a more subjective manner, as we did with Coney Island. However, the structured process gave us just enough direction along with a general framework to operate from that allowed for the right amount of opportunistic behavior, and plenty of room for play.