Votes in favor of an alternative future? 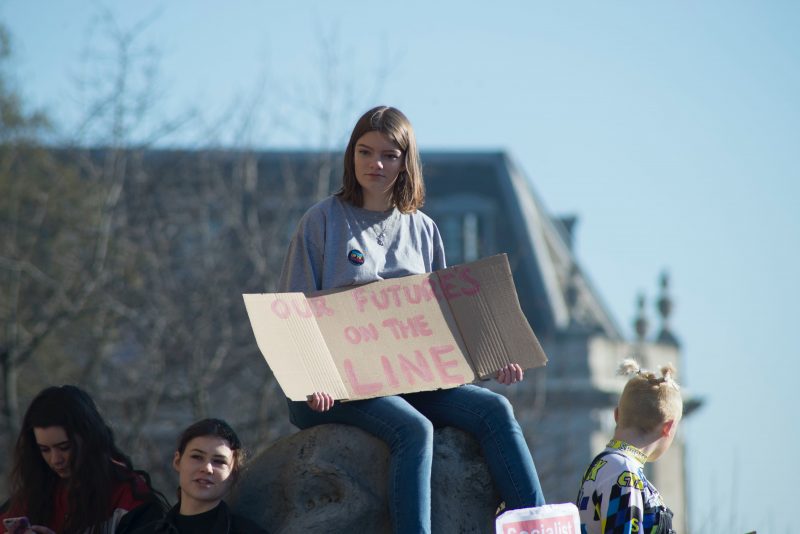 What if the citizens of a nation had the possibility to make all the decisions that are debated in congress through their vote?

During the last few weeks, I’ve been exploring this question through an experiment that began in one of our Design-led Research assignments and that turned into a personal learning exercise on speculative design.

The result, which I will describe later on, is only a draft and does not pretend to be a prediction of the future but rather a prototype or provotype [1], depending on how you want to interpret it, to open a discussion about the possible models that can emerge from the convergence between technology, democracy and design in the near future.

To guide this approach, I worked based on three concepts about speculative design that we have discussed in our seminar class of Transdisciplinary Design: 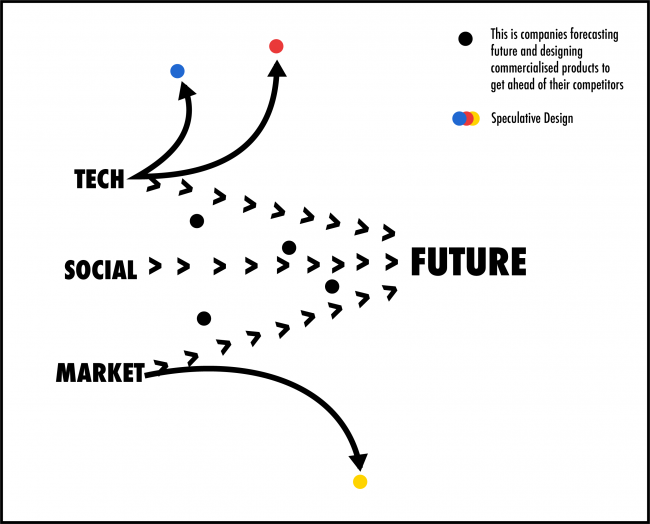 The illusion of a decision

What do we decide with our vote?

In most democracies of the world, the congress body depends on a voting process, where citizens have the opportunity to decide who should be the person who will represent their interests during a period of government.

In transferring that power to a congress delegate, there is an assumption that the decisions they will make, within the time frame they will hold office, will be consistent with the interests of those who elected them in the first place. This expectation, of course, is humanly impossible and mathematically unlikely to fulfill.

Assuming that the delegates could put aside their individual interests or completely ignore the dynamics of power or corruption to which they will be exposed to, there will be no way, within the current system, that they can guess if each decision they make, in favor or in against a bill, actually “represents” the same decision that any of their constituents would make. The best they can do is trust their own judgment and decide their support or rejection of the projects discussed under the assumption that this decision will be the most convenient for those who put them in that place. Nobody expects otherwise, do they?

The situation is more complex if we take into account the volume of decisions that they will make over time. Therefore, the vote that we give to that congress delegate will not contain only one decision in particular, but the thousands of decisions (on uncertain matters for the voter) that that same individual will make in the future. Their decisions, not ours.

But could it be different? What if citizens had the power to directly make all those decisions? What would be the role of Congress in a legislative system like that? What new value systems or paradigms could be legitimized? Would these models be more democratic? Or would they lead us to new types of regimes and unknown authoritarianism?

Welcome to Citivote, where your vote has weight.

Citivote is a public digital platform that was born in an alternative future in response to the socio-political crises unleashed in the 2020s.

After a systematic wave of failed electoral processes in different governments of the world, and the global crisis triggered by the systematic misinformation of digital media, local movements of citizens emerge to demand the redesign of the legislative systems of their respective governments.

Among the most critical cases arise constitutional reforms, in which political parties, citizens, social leaders, NGOs and other stakeholders come together to design their own models.

Between them, as a product of an international collaboration, Citivote quickly positions itself as one of the most viable models. The platform makes it possible to systematize bills and conduct citizen votes to collectively endorse or reject said bills.

As it is an open-source platform, its adaptation varies between government and government, giving rise to multiple versions. 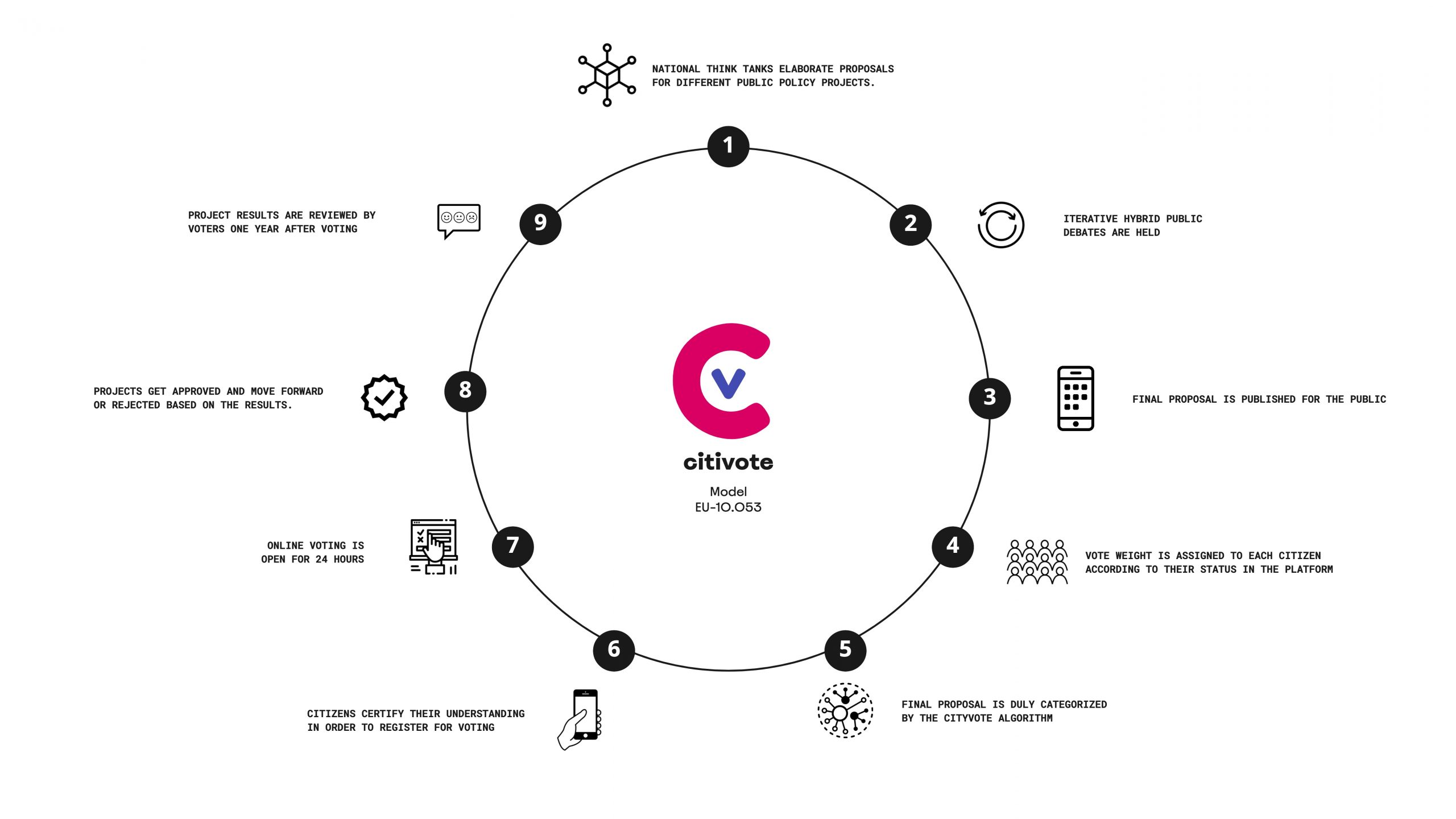 The traditional model of political parties and congress delegates of the 20th century and beginnings of the 21st century has completely disappeared. In their place, different Think Tanks have emerged: highly qualified institutions, stemming from different ideological spectrums, that comply with the most rigorous national and international certification processes to develop public policy projects.

Every Think Tank has a team of specialists who research, design strategies and manage the execution of projects that are approved for them in one of the 100 official categories designated by the Citivote platform. The preparation for each proposal takes between one and three months.

Every project proposal is initially published as a beta draft: a preliminary version of the project that is available for the public to review for two weeks. During this review period the proposal is only open to receive comments and feedback from the different stakeholders through Citivote’s digital platform.

The feedback given is processed by the proponent’s team of specialists, who have an additional fifteen days to introduce required changes and present their final proposal to the public – or to decline and archive the project.

3 – Final proposal is published for the public in the Citivote app.

The final document of the project is published on the Citivote platform. Every published project has a summary of the most relevant sections and a downloadable version of the complete proposal.

Every citizen who has a State ID will be automatically registered as a Citivoter. All citizens, without exception, can vote and participate in the decisions of all the projects and reforms presented by the Think Tanks through the Citivote platform.

The votes of all citizens are classified by the system within each project with one of three possible scores:

Those who register as experts must validate their expertise. This validation will be runned automatically by the citivote algorithms through one of the complying with one of the following requirements: 1) citizens have technical or professional certified training related to the category 2) citizens have at least 5 years of certified work experience in an organization classified by the system within the category or 3) citizens approved the state test for that category.

Those who register as Expert Citivoters in a category have the obligation to vote for at least 85% of the projects that the system assigns to that category.

The Expert Citivoter votes will have a value of 3 points only in the categories in which the citizen has an Expert certification. In all the other categories their vote should be considered a common vote. 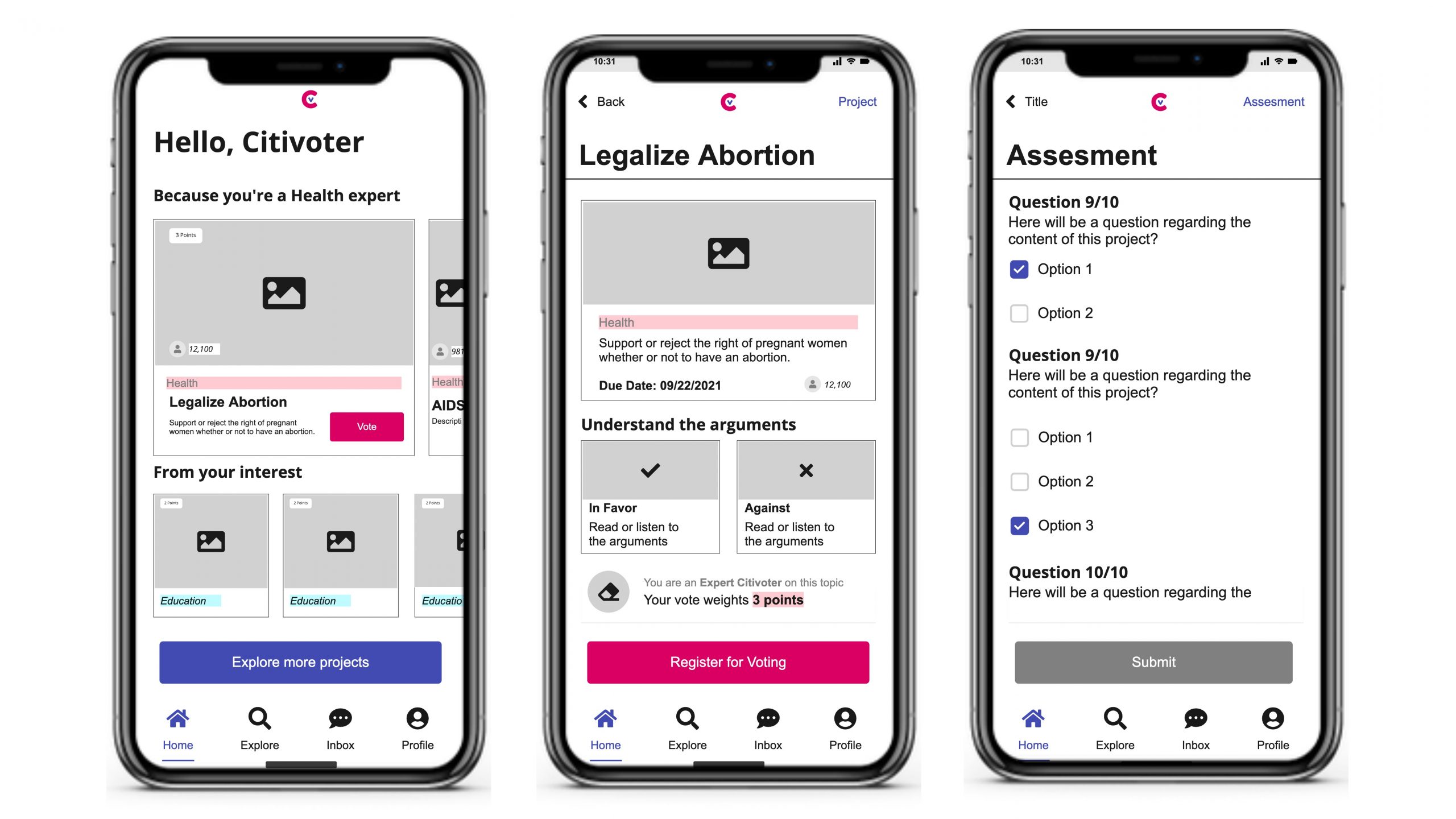 5 – Final proposal is categorized by the Citivote algorithm

The Citivote algorithm processes the information presented by the proponent Think Tank and the opposing Think Tank and automatically identifies and assigned the specific categories and subcategories with which the project will be displayed in the platform to the people.

6 – Citizens certify their understanding in order to register for voting

Once the proposals have been published on the platform, all citizens have the opportunity to register to vote for any of the available projects.

To make their registration effective, all citizens are required by law to complete an evaluation that demonstrates their understanding of the project in question. The evaluations are made up of 10 multiple-choice questions, randomly chosen by the system from a list of 50 questions that have been previously elaborated and mutually approved by both the proponent and opponent Think Tanks of the project.

Citizens have only a single chance to approve the test. They approve it with at least 8 out of 10 correct answers. Those approved will become registered voters for the project. Otherwise, they lose the opportunity to participate in the voting process for that specific project.

Both registration and participation in the voting are optional, except for citizens who are experts in the category to which the project belongs, or citizens who have previously declared interest in said category.

Every voting session will be open to citizens who have previously approved the registration test for a period of 24 hours in a designated date.

Votes will be processed only digitally through the Citivote platform. Only one project per category can be voted each day. This means that on the same day citizens might be able to vote for a minimum of 1 and a maximum of 100 projects, given that they approve the respective registration tests for every project.

8 – Projects get approved, rejected, or canceled

Once the 24 hours allotted for voting are over, the project will be approved, rejected, or canceled.

Citizens who have already voted will be able to access the results in real-time.

Projects that are rejected will have the opportunity to be reviewed by the proponent Think Tank and presented again for a second instance of voting within the following 30 days.

Projects that are canceled will be archived for at least two years, before they can be reviewed by the proponent Think Tank. 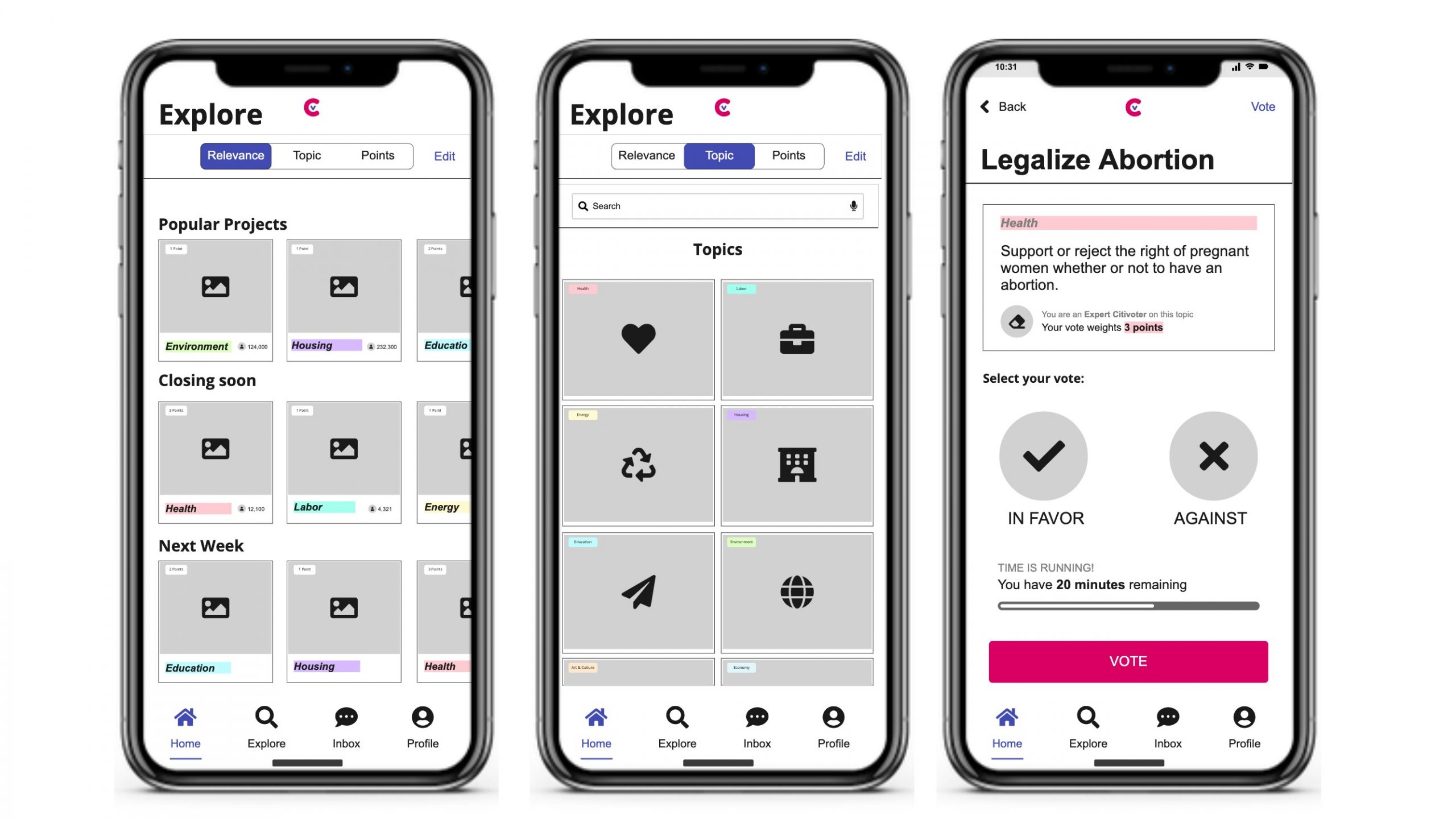