Primatologist and anthropologist Agustin Fuentes writes, “We shape and are shaped by our caretaking, consumption, manipulation of, destruction of and compassion for other beings. Human evolution is a multispecies endeavor, a current in which humans and our companion species have always been caught.” [1]

Noodles the cat has changed the human inhabitants of this apartment, as well as elements of its design, and we have surely changed Noodles, too. If I reflect – and really entertain my current delirious energy – on this experience of sharing a dwelling with my feline friend, there might be a lesson waiting to be learned about how multi-species collaborations are inevitable in the design and maintenance of shared spaces – extending from a hyper-focused domestic environment like my own to larger-scale systemic projects and more complex ecologies. With a little extra care, environments and objects we design can be kinder, more accommodating to the “others.” Further, through interactions with non-humans we can also learn about ourselves and each other.

Having never before cohabited for a significant period of time with a pet, I was pretty excited for Noodles to move in, along with my new roommate, El*. El had been in and out of the apartment for a couple of months before moving in for good in July, and my long-term roommate Em* and I had been hearing about her cat. On the night she officially brought Noodles to stay, I remember Em and I skulking around the living room with our phones, taking paparazzi pictures of our new companion. Noodles himself was nervous and shy, opting to spend most of his time under El’s bed, unaccustomed to his new environment. 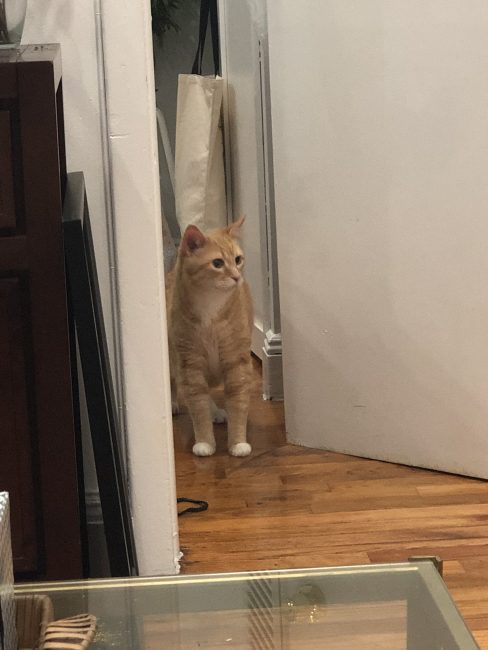 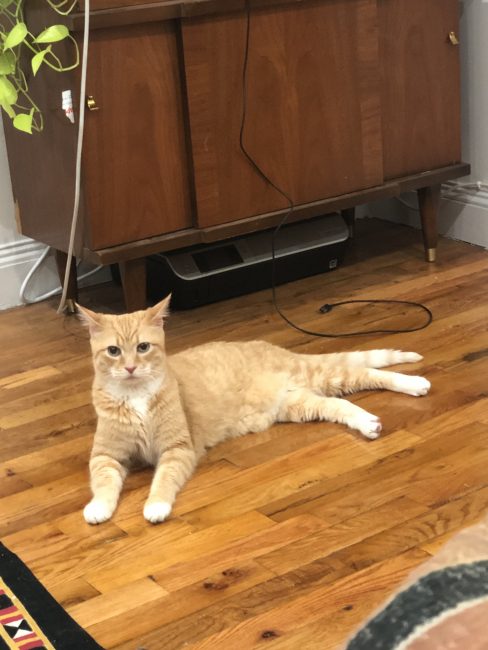 At this stage in his residence, he had very little power in determining the way the apartment looked or functioned. The onus was on him to get used to the way things already were – and conversations between us human roommates revolved around him getting over his fears and hanging out with us on the couch, letting us pet him, and so on – a very anthropocentric view of his arrival. A couple of times in the first month he was there, he mistook the couch or the rug in the bathroom for the litterbox, which led to him being left behind closed doors while El wasn’t home. We felt bad that he couldn’t roam around, but it was seen as an obvious choice to keep him in the room so that he didn’t wreck our human possessions.

I personally thought very little about his lack of agency in this whole experience – in what humans consider a pretty normal act of moving to a new apartment. Fuentes writes of human processes “[sweeping] countless others into the process of human becoming—forcing them along for the ride, co-shaping our and their futures.”[1] Imagine being pried from your longtime home and being brought to a new place with no say in the matter, no advance warning, and expected to be friendly for the entertainment and pleasure of the strange interlocutors there. For a human, it would be traumatic. But pets are leashed around in this way without a second thought.

As Noodles became more familiar with his surroundings and began understanding the roles of various apartment fixtures, he ventured more freely without the need to mark territory. Wearing his sensory ethnographer’s cap, Noodles would sniff, move, and look around, going from the living room into the kitchen and later, into the corridor that stretches towards my room. While he was initially scared to go into my room, he worked up the courage eventually. The door to my room doesn’t close all the way from the outside so it’s easy for him to push it open. In response, El and I worriedly started putting chairs sideways in the corridor or doorway so he couldn’t get past. This limited his access to additional apartment space, but increased his curiosity. Every chance he would get, when the dreaded obstacle was temporarily removed from his path, he would saunter down the corridor until someone (ok, usually I) yelled, “Noodles!” or lurched forward to stop him, and he’d come bounding back, guilty.

Clearly, as he began taking more ownership in his space, it surfaced my own discomfort and unfamiliarity with a non-human cohabitant mingling with my stuff (though the primary fear was obviously pee). It was a funny little dance that has only recently stopped playing out, as I got inventive and realized that if I put a hamper behind my door as I closed it, he wouldn’t be able to nudge it open.

This whole thing sounds absurd when I write about it. But it leads to more profound questions of who has control in a shared, cohabited space and to what extent those in power are willing to relinquish a bit of that control. How do those with power restrict others’ mobilities and condition fear responses in them? How do those with power determine the very experience of the lives of the others? We often think of these questions in the complex human relations of race and class privilege, but per the work of Fuentes and others who study human-animal relations, it is important to also consider them in the context of our non-human companions.

Settling Scents in a Complex Ecology

It’s safe to say that even though the world (and its microcosm, my apartment) is set up primarily for humans, there are ways in which non-humans play a role in co-shaping the environment. Noodles’ presence in the apartment is known through his habits and new artifacts that have emerged in response to them. This can perhaps be seen as steps towards collaborative “niche construction” – an evolutionary concept that plays out on smaller scales as well. Fuentes explains, “In niche construction, organisms have an active role in shaping the environment in response to the pressures it exerts—there is a mutual mutability between organism and their environment.”

For one, Noodles has recently decided on his favorite spot in the apartment – the orange armchair in our living room. On this chair, you can see him try out several art-model poses, clean himself (thoroughly), and soundly nap with an angelic expression, until someone interrupts by entering the room, at which point he crabbily stalks back into El’s room. One can tell that this chair belongs to Noodles by the layer of light fur that coats it at mosts points in the week, until someone brings out the lint roller. Not only has the chair began to take on the form of its primary user, but my human roommates and I rarely sit on it these days. 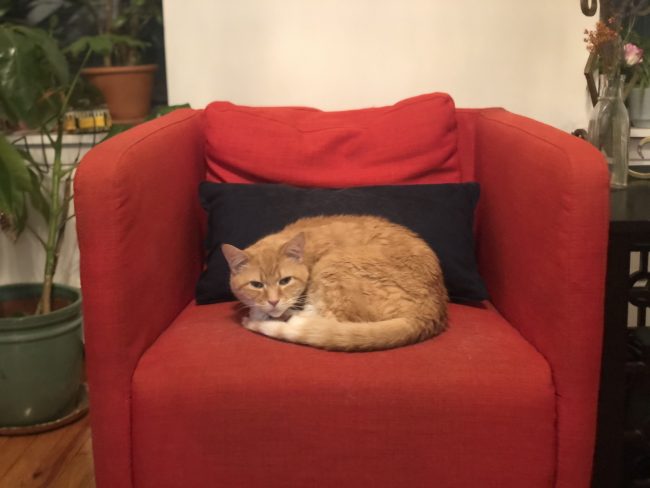 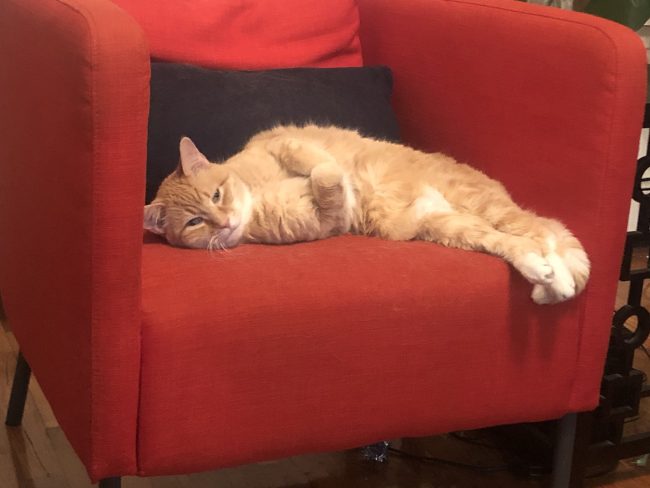 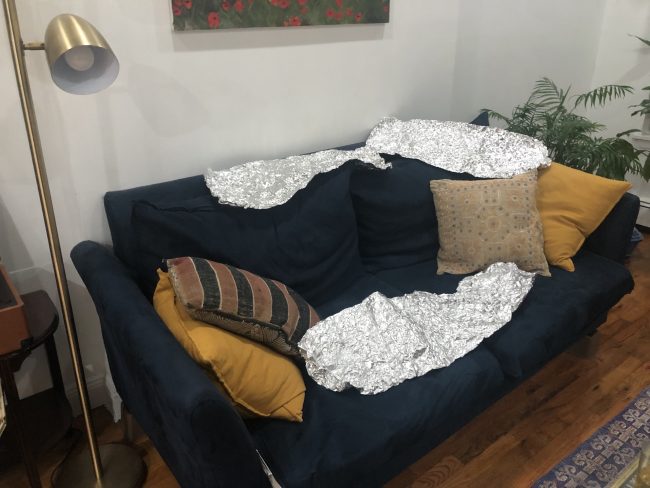 As if in subconscious retaliation, we the humans have decided that if the orange chair is his, the couch is ours. In an effort to prevent him from peeing or walking on the couch, it has been covered by shiny, crinkly aluminum foil. Funny enough, what this means in practice is that the three of us rarely sit in the living room together. Though the foil can easily be folded up and moved aside, this doesn’t often happen, because we are much more likely to simply interact with the space as is. It’s a classic tale of design!

Another recent addition to the living room has been a new litter box (with the primary one being in El’s room.) What this means is that there’s a prevalent “cat” smell as soon as you enter the apartment – it can’t be mistaken. The scent has settled, probably absorbed by the fabric sensors of the furniture and the rug in the apartment. After a while of being inside, you become accustomed to it, but I can imagine my mom’s revolted reaction if she were to step foot in here (she’s really not a fan of cats.) On days when the scent feels especially strong, I go sit in my room rather than spend time in the living room where I otherwise would have lounged. Honestly, I don’t mind much, but I think it’s another look into how the innate habits of dwellers can influence one another’s behavior.

The coalescence of these examples speaks to how Noodles has asserted his influence in subtle ways – just by being himself. To some extent, he has taken over the domain of the living room by influencing both the more permanent fixtures of furniture and the mutable human elements. The process of niche construction is ongoing and I wonder how this dance will continue in the future as all four of us in this apartment grow collectively.

It speaks to the notion of “becoming with,” as Donna Haraway says – not becoming alone as humans quite often believe they can. “Companion species are relentlessly becoming-with. The category companion species helps me refuse human exceptionalism without invoking posthumanism. Companion species play string figure games where who is/are to be in/of the world is constituted in intra-and interaction. The partners do not precede the knotting; species of all kinds are consequent upon worldly subject- and object-shaping entanglements.” [2]

The entangled dynamics that shape our small apartment ecology are surprisingly complex upon close reflection. We don’t always think of pets as being equal partners or as having equal stakes in any decision – we certainly don’t consult them in the same way we might consult a human. Yet, they do have visible and invisible effects on the way we behave and can reveal our idiosyncrasies. It’s more obvious that we affect their lives, but not merely in the limited ways the established construct of human-pet relations suggests. This leads me to question what it would actually mean to have animals play a more active role in designing built environments, things, and services. As we’ve discussed in class, the ethics can get murky since it’s difficult to get full consensual participation and it feels trite to claim that we’ve “co-designed” simply by forcing animals to do our bidding and interact with our designed objects. However, I think that it’s a positive cognitive shift to be asking questions regarding power and acknowledging that we (humans) are not alone. And in the face of ecological collapses world over, we’ll all need to use our noodles to find creative and caring ways forward.

Fuentes’ perspective on the matter is eloquent: “We are one of the few species that had a hand in making itself and the world, and will continue to do so. We need to be more cognizant of these processes and impacts and recognize that nothing we do is only about us (as a species or individuals). If we are injecting the world with a human will, then we have a responsibility to manage the results for ourselves and for others.” [1]

**No Noodles were harmed in the making of this blogpost

[1] Fuentes, Agustin. “Becoming Human with Others in the Anthropocene: The Long View.” Engagement. Anthropology and Environment Society, February 8, 2019. https://aesengagement.wordpress.com/2015/09/29/becoming-human-with-others-in-the-anthropocene-the-long-view/.