The story about a leaf

As someone who grew up in a rural area, I have a strong connection to plants, trees, and nature. Being around nature is something that is crucial for me. Since the beginning of the semester, the book “Thinking in Systems”, by Donella Meadows [1] made me ask myself a question about a fallen leaf – Is a leaf that falls on the road a part of a system? How? – that question has been rolling inside my head for a long time. Currently, while I’m living in New York, it is interesting to see how the city in some ways embraces nature, even if it’s an urban nature.

It was quite obvious to me that this leaf that fell off a tree on the concrete road is not part of the urban system. The concrete and the asphalt cannot be enriched by the leaf. But now, after understanding more in a variety of systems and multispecies systems, I understand that fallen foliage in the streets of New York are part of the city environment system, multispecies system, and even law system.

Looking at the changing trees and thinking about systems was also probably the reason that I started to pick and collect fallen leaves from the sidewalks during this autumn and to observe their shapes, sound, structure, and morphology. I started to look “through” the leaves and to be inspired by them. That process was ended as a booklet I designed that visual my abstract associations to words that identify leaves.

Images from my booklet: “A Play With Morphology of Leaves” [2]

The value of falling leaves is a part of the multispecies, insects and the solid ground’s ecosystem. It functions as a shelter for some animals, bacterias and enriches the soil.

“When leaves fall to the ground, they marry the soil beneath them and decompose becoming a naturally made mulch in their own right. Their minerals coalesce with the soil, producing nutrients beneficial not only to the earth, but also to those who depend on them for survival” [3]

Humans in the city, rarely see those small insects that are fed from the fallen leaf. When a leaf fell off a tree and touches the ground, it turned into “dirt” and “waste’. Leaves mixed and combined with the dust and other materials and called “dirt”. The fallen leaves should be cleaned from the pedestrians for a reason. For example, It could impede pedestrian traffic or a pedestrian can slip and fall because of the leaves. Dealing with dirt in the city is part of the urban’s ecosystem. In the article called “Autumn, Has Arrived – Are We Responsible for Fallen Leaves?”, written by CityLand, a newsletter that provides coverage of land use applications in New York City, fallen foliage described by New York City’s Administrative Code as “yard waste” or “organic waste”. This waste now has to be cleaned.

In New York City, cleaning the leaves is voluntary and residents do not receive summonses from the Department of Sanitation for fallen leaves on sidewalks unless it is mixed with trash or debris. Sanitation Department encourages residents to recycle their fallen leaves and turn them into soil-enriching compost through a Compost Give Back program, which provides special paper leaf bags in some areas in the city. I wonder what would happen if there were no one who cleans those leaves. A bulk of leaves might bring unwanted insects and animals to the streets.

Trees are part of the social and economic system and they are an important part and identity of the scenery in New York City. Matthew Jensen, an artist who lives in the Bronx exhibited a photographic series, called “The forest between: Street Trees and Stewardship in New York City, 2019” which shows the strong connection between city residents, neighborhoods and their trees. Some selected photographs were presented at the MoMa PS1 exhibition, called “Who Take Care of New York”. [4] 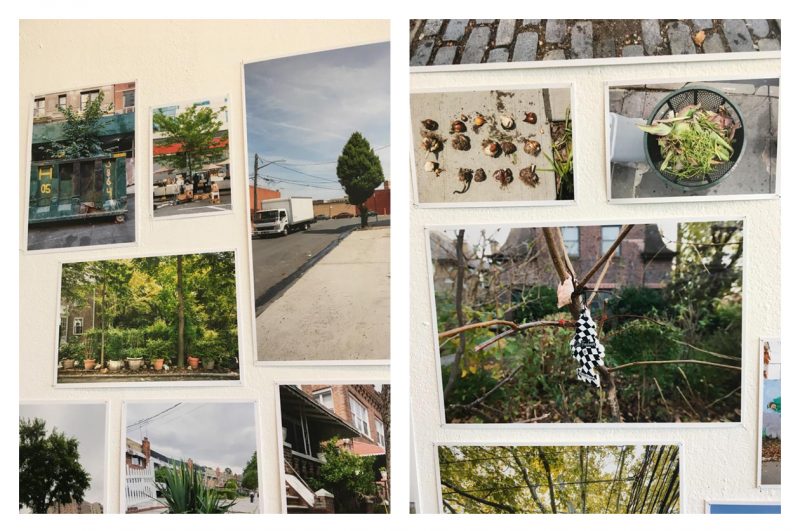 Images from the exhibition “Who Take Care of New York”

Another example of the interesting connection between city government, residents and trees, I found in Park Slope, in this note on the tree saying “I’m your new tree” with a barcode to scan. This tree is part of NYC’s Urban Forest, called MillionTreesNYC. Trees provide many environmental, social, economic benefits to humans and to the environment, such as slowing global climate change, increased property values, and even crime prevention (You can read more about it here [5]). 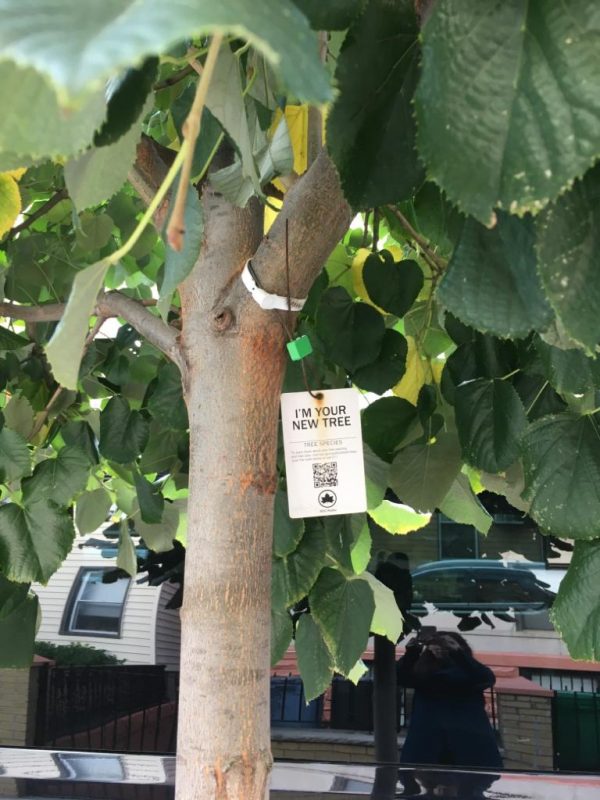 The changing colors of the leaves mark the fall season before winter. The fallen leaves role is also helping us and other species, to understand that we need to be prepared for the cold winter. It also can affect our emotional situation in a poetic way. When I’m thinking about us as designers, we learn and are inspired by nature. We learn about forms, structure, function, shape, function. We mimic, develop, inspired by it and using natural material resources. As designers, we observe, collect information, analyze and at the end of the process develop an outcome.

Harpreet Sareen, an alumni student in the Design and Technology department in Parsons – The New School, in his research implements wires and technology into plants. By doing that he can control plant’s growth direction and plant behavior by using sensors and light and to create plants more resilience to extreme weather and environment. As Sareen said, “there are no ethics about plants”. There are some ethical rules about protecting nature in reserved areas but maybe it is time to create rules for protecting plants from technology and to be aware of unwanted effects and results. [6]

Agustin Fuentes writes in his article, “Becoming Human with Others in The Anthropocene: The Long View”

I wonder how leaves that by using technology such as and sensors and programing inside the structure of the leaf will affect the world in the future? Maybe the future tree will be designed in a way that the leaves will not fall down and can stay green forever? How will the use of technology inside trees and leaves, affect the environment, social and economy in the future?

As designers, we should be conscious and design for a better world and environment.

[2] Noga Berman, “A Play With Morphology of Leaves”