I’ll let you in on a secret: when I was looking for undergrad programs, I knew I wanted one thing. It wasn’t a certain major, a specific size, or a location; as a first generation college student, I was overwhelmed and underprepared to make those decisions at the start of the process. But I knew I wanted one with a radio station, and made it a point to look at schools that had them.

So when I joined my college’s radio station, I was ecstatic. Who wouldn’t be when you had access to Vermont’s largest music library?

But my relationship with music has been marred by politics, gender stereotypes, and access. I had wanted to learn to DJ since middle school, but when I asked those involved in my radio community who did more than just fade in and out of songs for help, I was met with a less than enthusiastic response. I tried a couple times, but eventually gave up.

This isn’t an outlier. Women are often dissuaded from joining what are deemed “technical” hobbies or jobs. The Huffington Post talked with Umfang, a DJ and producer based here in NY about it, and she noted that “we are culturally brought up to think that women will always play softer and prettier music and they’re not necessarily as technically talented. The last five years or so I’ve had a woman mentor tell me that my brain isn’t different from other male DJs and that I can learn some of the more technical stuff just as well. I had just been conditioned to think I simply couldn’t do it.”

This is exemplified by women working in various music roles. Radio is dominated by men; in 2016 women make up only 15% of broadcasters according to the Department of Labor. It’s worse for people of color: blacks make up 13%, Asians 2%, and Latinos at 12%. The now-defunct music blog Thump explored the gender inequality of festival DJ lineups, noting that there is still work to be done. 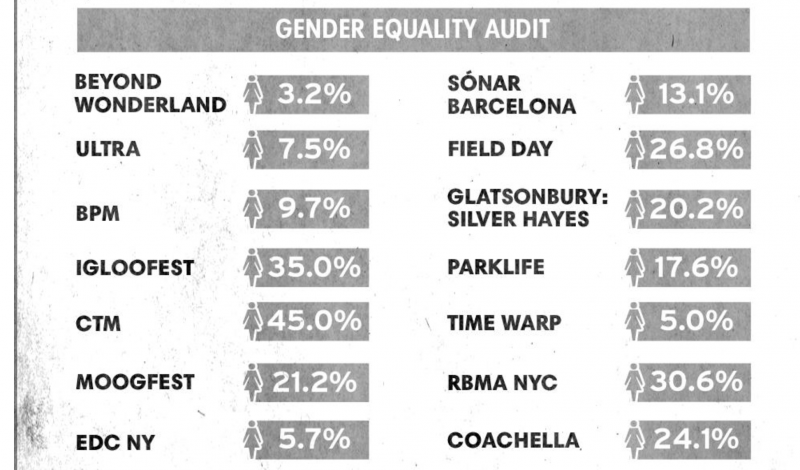 A snapshot of Thump’s findings in Infographic form // via Thump

And this isn’t just a US problem: Australia has this gender disparity too. 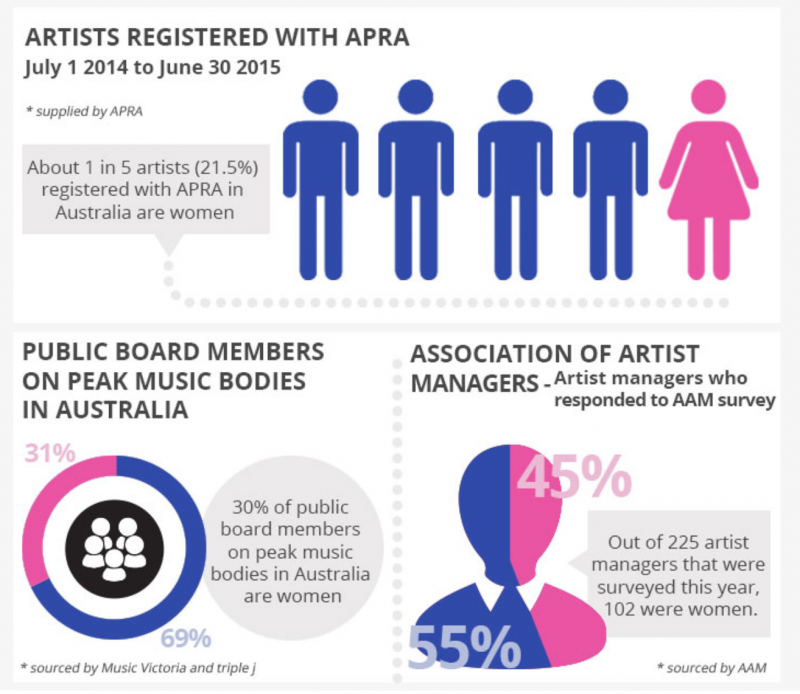 Additionally, access to the industry is typically dictated by economic bracket. When I finally settled into NYC, I had few music contacts so I caved and decided to take a DJ class. It cost half a month’s rent, but I was determined to learn the basics. Because of the high price of classes, fewer minorities and people from lower economic brackets can try something they might want to. Sometimes, they might not even know it exists.

Is this because the music world is an exhibitor of symbolic violence? Boehnert and Onafuwa discuss this term in their paper “Design as Symbolic Violence,” describing symbolic violence in a way that “priorities, values and even sensibilities [that] are reproduced through cultural practices, processes and institutions.” There’s a relationship between their idea and the way music industry works now. Music, like design, “privileges male perspectives and men’s priorities it reflects the concerns of the majority of the senior people in the design industry and education in ways that impact half the population.”

Are there ways to change this? There are thousands of words spilled discussing the problem: from hip hop to jazz to punk. How can we work to change gender disparity at a systemic level, where the language around it is so fraught with tension?

Not surprisingly, the internet has been a boon for musical education, thus making it more accessible for those in rural areas, those in need of lower price points, and those who cannot find mentorship in the field. With the internet, you can look up music theory on YouTube and find used gear on Craigslist. Virtual communities hosted in private groups on platforms like Facebook connect individuals around the world and on the next block. A good example of one of these communities is Sister, a worldwide collective of female and non binary people “with the intention of solidifying a strong network of electronic music artists across the globe.” They do this by promoting cross collaboration, supporting learning technical skills, and offering gigs to touring members, thus linking together those whose agency has previously been denied to form a powerful network of support, advice, and jobs.

These virtual communities create space for discussions that members might not feel comfortable discussing, with many led by POC. They’re explicitly open to everyone who identifies as a woman/GNC, working to provide those spaces that Teju Cole covets in his Atlantic article: “marginalized voices in America have fewer and fewer avenues to speak plainly about what they suffer; the effect of this enforced civility is that those voices are falsified or blocked entirely from the discourse.”

Are these techno-utopias? Do they live up to Harraway’s Cyborg Manifesto? No, but they’re thoughtfully working towards creating spaces open for those discussions.

Being enrolled in this program, I’ve now begun asking myself if it’s possible to design spaces and experiences, both virtual and physical, that allow for distributed power and promote individual agency in musical contexts. How can we ensure girls aren’t dissuaded from following technical passions? Can we design a club space that is truly safe? How might we design opportunities for women and minorities to access music education, experience, and clout in ways beyond what is already occurring?

Many are asking these questions within club culture. Fader hosted an article by Kareem Reid which says “Everyone deserves the choice of who they party with, and in my experience of clubbing in London, it’s especially important for anyone who isn’t heterosexual, male, or cisgender to be surrounded by people who ‘get it.’”

And lately, those working to create change are growing. Discwoman here in NY are tackling it head on, focusing on representing only women and non binary people in their rosters and bookings. Local NYC nonprofit Powrplnt runs on the idea that “access to technology is a right, not a privilege” and provides workshops and art education to teens and underprivileged individuals.

But how do we amplify these city specific examples? Can we change the system at large? What is my role and responsibility as a participant and “designer” in this space, both in NYC and globally? I’m hopeful that through this program, I can learn ways to further explore these questions.