I Ought to Be Thy Adam

I’ve thought about Eve quite a lot for a person with no real connection to that faith. And you know, I’m not really interested in Adam, in firsts and ribs and dust. In divine proclamations, and divine promises, and a divine betrayal. I am, however, interested in apples. In temptation. In knowledge. And, of course, in Eve.

A couple weeks ago, I went to the Metropolitan Museum of Art, and saw a new work by an old friend: Eve by Auguste Rodin. In the description it was written that Rodin intended the first loves to stand at his bronze doorway piece The Gates of Hell “as perpetual witnesses to the consequences of their sin” with Eve herself as “a physical manifesto of remorse; her body twisted in suffering, her face imprisoned within a gesture of anguish” (Eve, Rodin at the Met). And it was that anguish that intrigued me most about her. I paced a circle around the grey plinth, head tilted to catch her unmoving gaze, feet silent against the well-worn museum floor. The room vanished around me, the sounds and lights and museum-goers fading into the background. She felt like she absorbed all the light in the room, posture curled in on herself, hands grasping, pulling at her own skin. For a brief moment, I felt like I wanted to cry. And to put my hand on her shoulder. Instead I tip-toed another circle around her, breath caught in my chest, traced the brutal edges of her body with my eyes. Paused in front of her, we two twin statues locked in gentle orbit.

See, the thing I love about this work, about so much of Rodin’s work, is the capturing not of beauty or grace or elegance, but of pain, of misery, of ugliness. Of truth. This is not Eve, fresh-faced and innocent. This is her grieving, anguished, hurting. Monstrous, even. And in her tortured shape, I saw the traces of Bayo Akomolafe’s When You Meet the Monster, Anoint Its Feet. 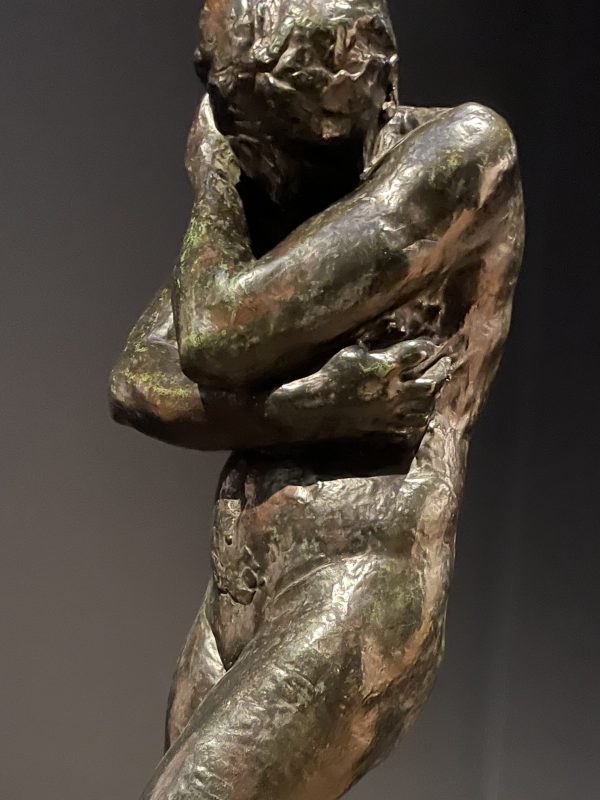 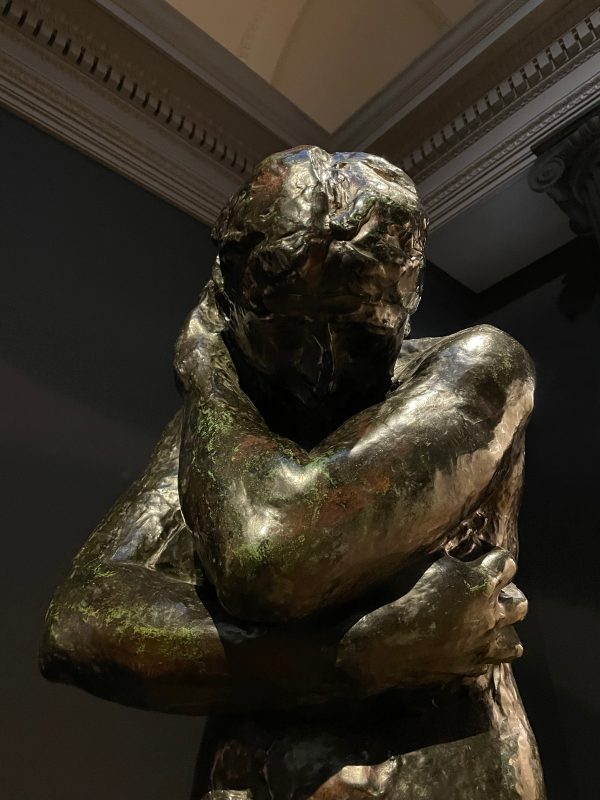 What is a monster? And for that matter, what is a human? The course of my curiosity has long been the pursuit of this kind of quintessential humanity. What is being, and what exactly is being human? Of course right away Akomolafe pulled this question from me, tore it away with both hands. And it needed tearing. The human exceptionalism that underlaid that line of questioning—that there was something intrinsically special, something more about us as homo sapiens—was a false temptation of its own. A kind of arrogance, maybe, meant to justify the impact that humans as a species have had on the earth and on each other. My quest for a singular answer was a fool’s errand; I was looking for an answer, a solution, that simply wasn’t there. I hesitate to call us simply apes with enlarged frontal lobes—too reductionist again, I fear—but at the same time, I think that the distinction I was looking for was only interested in reaffirming the excellence of humans—oh, the cleverness of me!—and ignoring, willfully perhaps, the ramifications of such a belief. The notion of a single, unified, definitional humanity exists chiefly to deny it to others, to draw boundaries around and between. Akomolafe explicitly states that there are no such boundaries, between self and body, between self and other, between self and world: “We live and are lived through; we are composite beings, companion species, emerging within and among assemblages” (6). The idea of isolating a definition of humanity at that point seems antithetical to what the question itself seeks to uncover. To be human isn’t to be just one thing, easily named and framed and bottled. It is a many-weaved tapestry, wrought by many hands.

I wrote in a previous post of Douglas Hofstader’s conception of the self as a looping narrative, and the ways in which our enduring selves are simply a constant updating of a life-long movie reel, and in which characters and plot lines are interwoven and interpreted to retroactively create a sense of a person. I think this ties to Akolomlafe’s work as well, when he says: “to a certain degree we really are at a loss for words when it comes to making affirmative statements about our core identities: where we come from, where we belong, and what makes us, us” (Akomolafe, 8). Here was my defining question, boldly thrown back in my face! And here again he comes to the point that was critical for me to realize, about the interdependent nature of the sort of self-narrative I was envisioning: stories aren’t told in isolation. How can they be, when the very nature of language requires being taught it?

And these ideas of self and storytelling Akomolafe references again, saying that we have been “making matter more mind-like and mind more matter-like” and that “in this epoch of porous boundaries, our bodies cannot be considered apart from the stories we tell of them” (17). Not only is the story told in many voices, our own voice is itself tied, from lungs to vocal cords to neurons firing. The physical tied to the metaphysical, reciprocally dependent, giving meaning to each other. Nothing can be understood as only one thing. As Akomolafe says: “stories have consequences; ideas have bodies” (6). Just as Eve is the statue, is the story, is the apple and the temptation and the snake and Adam and me. And is, just maybe, a monster.

I definitely feel monstrous, sometimes. I don’t like it, but I feel it all the same. I think I’m drawn to these dark corners, these imperfections, these messy mashups and ugly chaoses. To the honesty, the unfiltered-ness of them. I like in-betweens, I like incompletes, I like rough edges. I am all of the above, you see. Is it society, civilization, then, that makes us mask the monsters? Makes us pretend to be perfect edges and clean lines and pure white carved marble when we are the unfinished, alloyed cast of bronze?

And really, what is a monster? I think about Eve. Born of Adam’s rib. Composite. Monstrous. A ‘first’ in her own right. So maybe we aren’t better, aren’t more. But we are something. Distinct, but undefinable. Unique, and miraculous, and as common as an apple. These great big brains have to be good for something, after all. Or maybe that’s the apple again, that temptation, that forbidden knowledge. The bite we humans took that was more than we could swallow. Maybe it was this self-knowledge, this self-consciousness, the curse of our great big brains, this thinking, and thinking about thinking, and thinking about thinking about thinking. Our greatest pride, in many ways, but in other ways the heaviest burden we have to bear. So not more, but something. Something monstrous. Each moment, each person, unique and utterly mundane. Tied and given meaning only by their connections, their composite-ness, their woven stories. I think about the person-story of Eve. The story-person of me. My sister-statue, immortalized in bronze before me. I feel my eyes pulled to her shadowed, eyeless face. And I walk on.