How To Interview The Love Doves On Your Windowsill 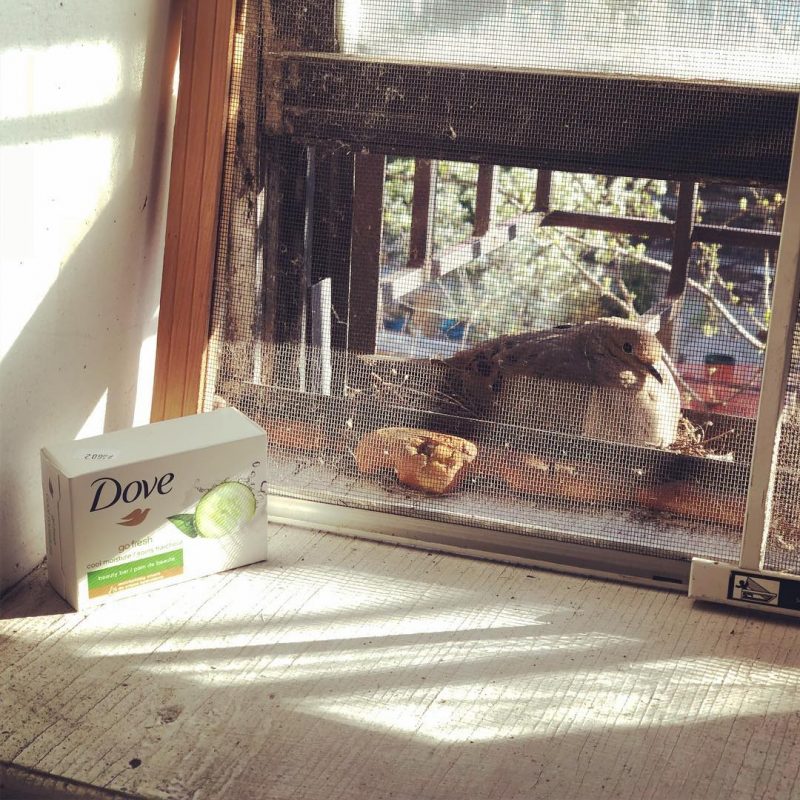 Mama dove who nested on my windowsill this spring. Photo: B. Cleary

may my heart always be open to little
birds who are the secrets of living
whatever they sing is better than to know
and if men should not hear them men are old
-e.e. cummings

This past spring, two doves fell in love in East Village. Their beady eyes met from across a crowded Tompkins Square Park. She enjoyed pecking at bagel crumbs while he loved to feel the sun on his wings. After a whirlwind courtship, the two were ready to move in together. Of course, between the deadly neighborhood hawks and small dogs that love to chase, finding real estate in East Village is never an easy task. Eventually, she found the perfect spot – a third floor windowsill on East 9th Street across from a small garden. The upstairs neighbors, a family of sparrows, were a bit annoying with their squawking and attempts to steal their nest materials, but such is city living. 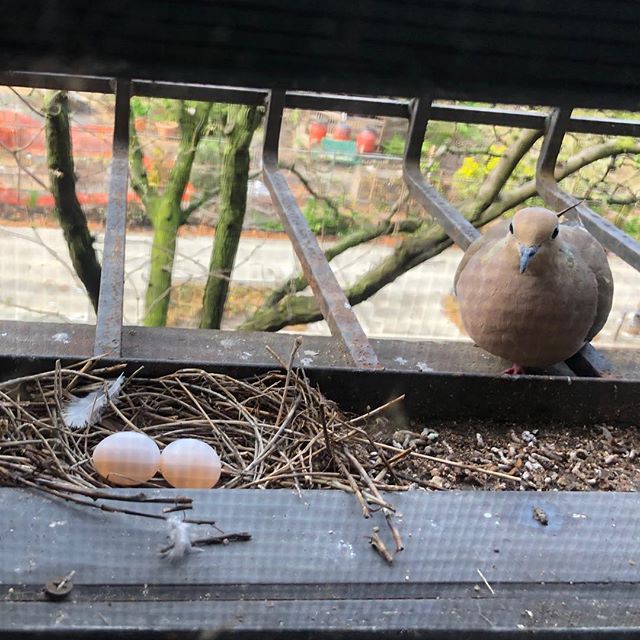 She laid two eggs. Like any good dove couple, they took turns alternating between sitting on them or flying off to get food. At 4pm every day, they would carefully swap positions and preen each other. “Coo–OOO-ooo,” they called to each other. 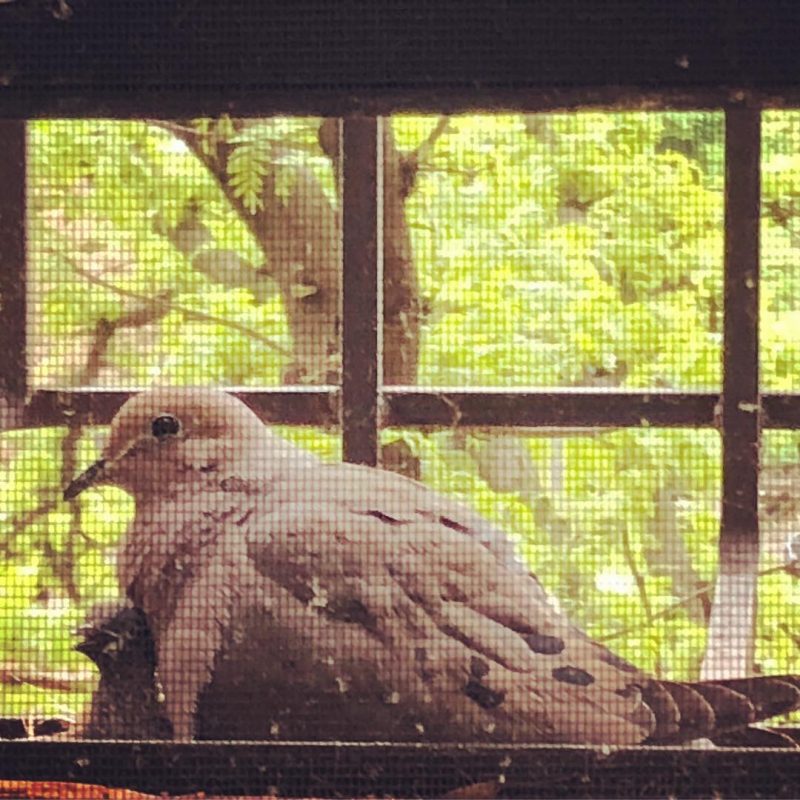 Then, one magic April day, a baby dove emerged from beneath his mom’s feathers. Both parents fed him “pigeon milk” from the corner of their beaks. After only two weeks, it was time for the little guy to take flight and the entire family flew onto their next adventures. Little did they know, they were leaving behind a strange human behind the window who was now suffering from an acute case of empty nest syndrome. 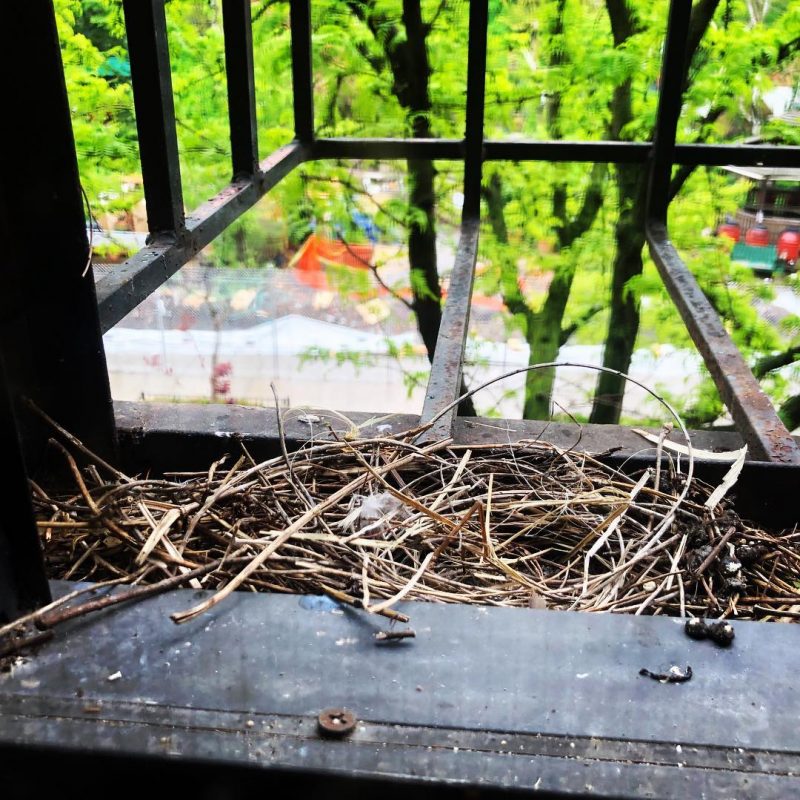 I couldn’t help but think of this lovey dovey duo while reading Augustin Fuentes’ Becoming Human With Others In The Anthropocene: The Long View. As he explains,“In niche construction, organisms have an active role in shaping the environment in response to the pressures it exerts—there is a mutual mutability between organism and their environment.” [1] Not only did this dove couple shape its own home, I can also see how our human home both affected and was affected by the nature around it. My husband and I moved into our East Village apartment after a long migration from our “nest” in Chicago, arriving just as Hurricane Sandy did. Since our block is technically below sea level, soon much of our neighborhood was underwater. We were thankfully on an upper floor, but the storm had devastating effects for my neighbors and other low-income residents in the area. This is unfortunately perhaps foreshadowing of what additional challenges climate change, caused by the very pollution associated with human urban development, will bring to cities in the future. While in many ways we were fortunate, we still didn’t have heat or hot water for months, urban camping our way through the fall and winter.

Just as the doves searched for twigs and other nest materials, we too scoured the streets for furnishings after the water went down – dressers, shelves, a laundry basket and other home goods that got thrown out with the monthly cycles of move out dates. My motto was, “if you can Lysol it, you can live with it.” In one daring move, I even picked up an area rug that nearly destroyed our building’s washing machine. About 80% of our furniture was either literally found on the street or bought cheaply from nearby apartments listing on craigslist. I thought about the “ecosystem” of furniture and belongings that had perhaps been cycling along the same few blocks for months or maybe years. Who had owned our white IKEA Malm dresser before we picked it up off the street? Had they bought it new or found it themselves? I thought about putting a note on the inside of it for its future owner when we put it back curbside a few years later. Then, a friend down the block got bed bugs from their own furniture scavenging so we stopped doing it ourselves. While they are any New Yorker’s deepest nightmare, bed bugs do demonstrate a kind of beautiful yet inescapable interconnectedness that we have not only to our neighbor humans, but also our neighbor critters.

Our human nest, while absurdly expensive, soon began to crumble in various ways. A large crack spread across our bedroom ceiling, where gentle droplets of water would fall upon us anytime our upstairs neighbor showered. There were such huge gaps between our window frames and the building that you could actually feel your hair blowing indoors whenever there were big gusts of wind outside. Our own home felt less like shelter sometimes and more like a bunch of sticks that could collapse at any moment. And yet, those gaps between the window frame and the building became a perfect fixer-upper for many generations of sparrows that brought beakfuls of twigs and grass to turn those nooks into homes.

It seemed like a perfect set up until, much to my husband’s horror, baby sparrows started falling out of their window nests. He admitted to feeling a bit like Holden Caulfield in “The Catcher in the Rye” as he taped a little plastic cup beneath the upper corner of our window frame to save future baby birds from untimely falls. It’s such a good illustration of how fundamental the human tendency towards design, intervention and solutioning is. It also reminded me of the various “eagle cams gone wrong” situations that have caused public outrage over the years, say where one baby eagle killed another or an eagle family ate someone’s pet cat for breakfast. We are enchanted with nature until it betrays our human sensibilities, causing us to call the local park rangers incessantly to “do something” about that eagle nest.

After years of living in our apartment, the love doves swooped in and swept me off my feet. I was glued to our new “bird TV” as I called it and documented their saga on Instagram. This meant other humans in their local habitats now suddenly felt a connection to these birds, posting many crying emojis – such a quirky human visual language – when they ultimately flew the coop.

Now, while I love animals, I admit my understanding of them is about as sophisticated as a Beatrix Potter book. Let’s just say I am part of the herd of crazies calling park rangers to make sure the baby eagles are playing nice. Humans are bizarre in that we have somehow escaped the food chain. This makes us extremely prone to bias when we try to observe and understand our non-human friends. (See? I called them friends. Gah – how human of me.) For example, my “description” above of the so-called “love doves’” is of course more of a fairy tale riddled with anthropomorphism. In John Hartigan’s, Ethnography of Life Forms, he points out how human-centric our understanding is of culture and knowledge sharing. He proposes that ethnography might be one approach to help us better understand our fellow species on their own terms: “Since ethnography is about the cultural dynamics involved with place-making, it is perhaps the best-suited social science or humanist technique to apply across species lines.” [2]

Even when we have good intentions to “love animals” and “care” about them, we do damage to think of them from such a human-centric space. We force them into human narratives or even clothes, as we see with the mysterious recent case of pigeons wearing cowboy hats in Las Vegas. [3] 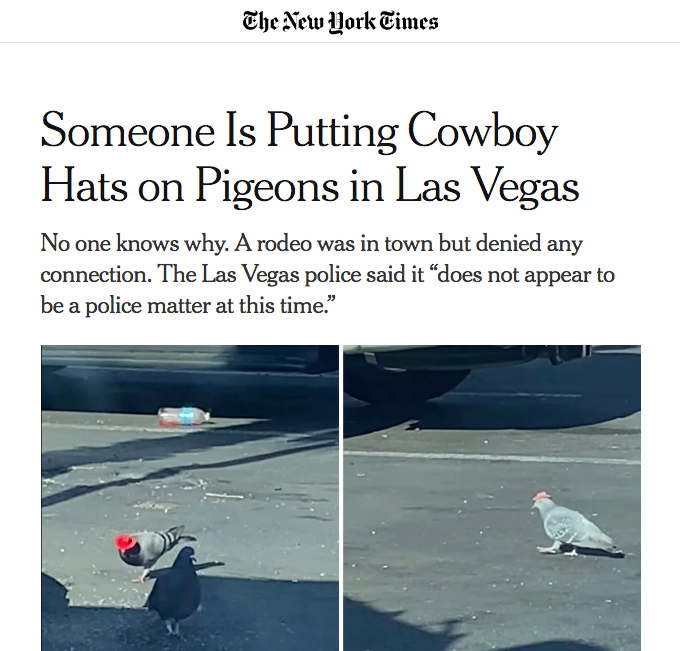 Humans may be the weirdest animal yet. There is a disconnect between this natural outpouring of compassion us animal-lovers have with a recognition of how a human’s good intentions can be deadly. We destroy the homes and futures of those creatures we claim to care for through our own blind spots, all while posting cute photos of dogs in costumes, doves in love and pigeons in hats. It’s odd to think how animals have become such a currency of the internet. I remember a coworker of mine, a data scientist, who lamented the fact that this video of otters holding hands had been viewed over 22 million times. “22 million multiplied by 1 minute 40 seconds viewing time equals how much lost time and distraction?” he wondered out loud. Sadly enough, it may be this very kind of digital distraction that prevents us from taking action on the real-life but less cute climate issues all us animals face.

In John Hartigan’s book, “Care of the Species: Races of Corn and the Science of Plant Biodiversity,” I was fascinated by one chapter called, “How To Interview A Plant.” [4] In it, he describes how he applied an ethnographic approach to understanding the culture and placemaking practices of plants. To me, it’s an interesting framework to de-center the human perspective, though of course we will always have some kind of human bias in our research about nature.

He outlines nine steps of how to conduct a plant interview:

How could I have more responsibly interacted with and “interviewed” the doves to understand them from a less human-centered perspective? I knew enough to not bother them, but did I ever really shift perspective to try to see them more clearly? Perhaps this is a project for a future spring. Until then, a first stab.

How to Interview the Doves on your Windowsill