Build a World with Future in Mind

A still from the film Minority Report, 2002

I saw this film several years ago. The main clue of it is the story of a typical fugitive.

It is set primarily in Washington, D.C., and Northern Virginia in the year 2054, where PreCrime, a specialized police department, apprehends criminals based on foreknowledge provided by three psychics called “precogs“. [1]

The perfect concept of Crime Prevention System also gets abundant embodiment in American television series Person of Interest. However, the perfect systems are likely to crumble easily when they are put into practice, more often than not the reason might be the control of human beings. In the face of reality, human beings are active and dynamic factors that are unstable. They probably become the most obvious weakness in these perfect systems. Just as I see in the movie Minority Report, the foreseeable future images are treated as mistaken reflections, and the high-level personnel who have the right to identify the predicted images in the real world deliberately create crimes similar to those on the crime scene and escape. Even though a set of rules which can play the role of prevention have been created, there still exist the possibilities of cheating. Systems are not invulnerable themselves, weaknesses and restrictions of the rules can be exploited in turn. In this respect, there may be no perfect systems.

Crime Prevention System mentioned above is a design on future perspective. Drawbacks exist in its application process since it is still overwhelming for human beings to operate on such a complicated system. However what impressed me is the highlight of the outlook for future technology and the combination of the future social structure, science and technology control and free will. The concept of foreseeability is gradually utilized by more contemporary designers in pursuit of sustainable, efficient and creative designs. Thinking out of box without restrictions of reality is becoming a new tendency of design and gaining its popularity in a rapidly developing technology society.

Here is a case of speculative design. The designer tries to ask questions instead of providing answers. Actually sometimes people do not need answers. It is really worth trying to inspire discussion among people. 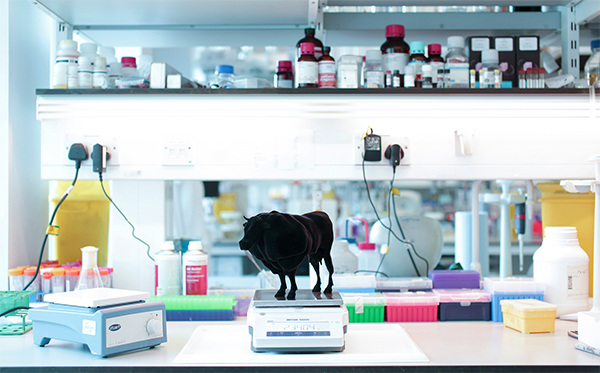 The Cow of Tomorrow, Paul Gong

“Through biotechnological processes, the dairy cow is heavily re-designed as a new type of utility animal, which is designed entirely to satisfy human needs by producing both milk and energy.

This project explores how emerging technologies facilitate man’s attempt to increase our control over nature, and if that would be for the better or worse. ” [2]

What does Speculative Design mean to me as a designer?

In current world, we cannot change the past, nor can we guarantee what will happen in the future. No one knows what will happen in next second, but I really think it is stirring to think about the future, especially as a designer. If I can escape the logical framework that follows the modern world, all possibilities are unfolded without being limited by realities.

My background is Industrial Design. At first, it seemed that my thinking mode of design was a linear model. My response to understand the unknown world was problem-oriented and I aimed at solving concrete problems. The design pattern was mostly doing research and then solving problems. Across this semester, I have been discovering, practicing, refining and evolving values. I have asked myself, “am I really solving the problem or just creating more problems?” Sometimes it is even over-designed. I want to escape my original design thinking mode. Fortunately, I am glad that I have been changing my thinking and designing style. I am at the turning point where I think to find a solution is not the only appeal of design and I try to find multiple possible futures.

I have done some design thinking exercise. Now from my perspective, what is important is that the transition from the purpose rationality to the value rationality. If I do not pay attention to exploring the relationship between human beings and outside world, the possibilities of design will be constrained. Design could be thought-provoking. As a creator and audience, I hope when I am looking at other’s work or when others are looking at mine, we could tell the stories of the thought behind. I am not sure what my design will bring about in the future. However it is still a privilege to have the chance to provoke people and make our world better.

In order to explore socially responsible design areas, I would like to imagine the development of the future world in different fields from the perspective of the designer and to constantly think about the role played by the designer, and then discover more possibilities.