As a child I had a peculiar habit of making happy and sad faces by picturing the arrangement of holes on the power socket. Back in India, most sockets had 3 holes which would result into an apt combination of two eyes and a mouth making it a perfect face. Seldom I would come across power sockets with an disorderly arrangements of holes or just 2 holes, which would make it a little difficult and less evident to picture a perfect face.

Never did I really questioned the reason behind different numbers and arrangements of holes on a power socket until recently, when I went to an Apple Store with a semi-dysfunctional MacBook adaptor. The tech-support person famously known as a Genius started coaxing me into purchasing a new adaptor than helping me diagnose the problem with the old one. His main argument was that I should buy the new adaptor as it would have the American/Type A prongs as opposed to the Indian/Type D prongs, which will help me get rid of my bulky converter or Universal Travel Adaptor. I ended up changing my adaptor to “Type A”

Upholding its status quo and customs of leading great inventions, America was the first country to develop the modern day two-prong electric plug in 1883. This plug system was designed to be used at 110 V, 60 Hz and lacked a third pin, which could be connected to the earth. Due to lack of grounding and insulation, this system was not safe and hence, instead of abiding by the American standards, countries started developing their own systems. The gruesome World Wars prevented countries from having dialogues of standardisation and by the end of the wars, it became a herculean task to change the already established infrastructure of power grids, buildings and appliances. Presently, the world is left with no less than 15 different types of power plugs and sockets and multiple universal or hybrid sockets.

The countries surrounding the Indian sub-continent such as India, Pakistan, Bhutan, Nepal and Bangladesh, all use the Type D plugs and sockets, designed by the European colonialists. As history proves it, the colonialists were great preachers but not practitioners. They advocated for abolishment of monarchy in India but still has an affluent monarchy thriving in their own country. Similarly, they designed the power systems for the Indian sub-continent but no longer used their own invention in their homeland. In fact, England designed its own power system differentiating itself from other European countries. Hence, not only are the power outlet devices an indelible mark of colonialism but also are constant reminders of the oppression and suffering.

In olden days, electricity was chiefly used for lighting purposes. The USA started using wattage appliances by directly connecting it to the light fittings. Over time people realised that with higher voltage, less current will be required to deliver more power and Europe started operating its devices at 220-240 V. Now there are 2 main standards- The North American standard of 110-120 V, 60 Hz and European standard of 220-240 V, 50 Hz. (Tatum, n.d.). Subsequently, this politics of design necessitates the use of adaptors or converters to use appliances designed in different countries.

Power plugs and outlets are arbitrarily named using English letters by the US Department of Commerce International Trade Administration (ITA), assigning the first letter of the alphabet- A to the type of power plugs used in America. (Plug & socket types, 2021). Although these letters do not denote any forms of hegemony or power dynamics, it establishes an identity system. For example, if you are using Type H power plug, you belong to Israel and vice-versa. This is a classic example of how the identities we design, designs our own identities.

Unlike passports, the power outlet devices do not directly restrict one’s mobility or freedom to movement but they do mandate some control sneakily and stealthily. In a world driven by technological devices and electrical appliances, as a traveller it is of utmost importance to have the right means to access electric power. Figure 2 showing the spread of different types of power plugs and sockets around the world helps explain the design politics of mobility and immobility with respect to plugs and sockets. The more the adoption of a type of plug/socket by different nation states/regions, the more is the freedom to travel without any barriers to free electricity by its citizens or residents. 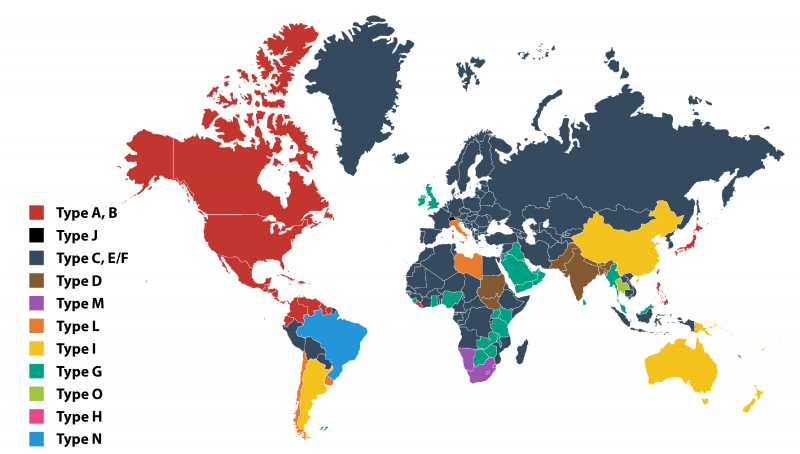 A hair dryer bought from France cannot be used in Denmark, although they share the same standards of 220-240 V and 60 Hz. This is because of the markedly different arrangement of prongs and holes on their plugs and sockets respectively. Every state benefits from thinking that the residents or immigrants will inevitably have to purchase new devices sold within its territory to adopt its own power system. I got a free Universal Travel Adaptor on my purchase of an International SIM card before coming to the USA as if this was as mandatory as a Visa before flying out. Such design mishaps lead to politics of consumerism, which ultimately feeds capitalism.

Today, the International Electrotechnical Commission (IEC) has proposed a universal standardised Type N design for power plugs but no country except for Brazil has adopted it. The IEC, similar to the General Assembly of the UN, can only propose laws but cannot enforce them. As a quick fix to this wicked problem, many countries have adopted multi-standard wall sockets as a quick-fix making the wicked problem worse as it violates basic safety standards. (Universal wall sockets, 2020).

Concluding, “Your Walmart shaver will still die if you plug it into a European socket with a bare adapter, Indians will still be reminded of the British Empire every time they unplug a laptop, Israel will have their own plug which works nowhere else in the world, and El Salvador, without a national standard, will continue to wrestle with 10 different kinds of plug.