A choreography of the hands, creating patterns.

Weaving is neither secular nor religious; it is sensible. It performs and manifests the meaningful lived connections for sustaining kinship, behavior, relational action—for hózhó—for humans and nonhumans. Situated worlding is ongoing, neither traditional nor modern. – Donna Harraway

I have been knitting in my lecture and seminar classes for the past 5 weeks. I have brought tactile material and making into this learning space to activate the senses, my sense perception. I seek to engage the eyes, the ears, the hands, the body in a process of learning and knowledge transfer, while shifting the “status of vision and its relationship to the other senses” [2]. Franco Beradi describes, “the skin, as it covers our body and shelters it from the external world, is also the most ancient and sensible of our sensory organs, our first tool for communication. Although it covers and encloses, the skin also opens the body to the world by bringing messages from the surrounding environment toward the mind…” [3]. During my undergraduate studies in Industrial Design, I had a professor who told me there are those who Think-Make-Think and those who Make-Think-Make, of which you are the latter. Knowing this to be true, I still have a tendency to hold-off making, privileging a seemingly linear process. But the phenomenological experience triggers other parts of my brain when my hands are active with material in them; both tactility and thoughtfully. A choreography of the hands, creating patterns. 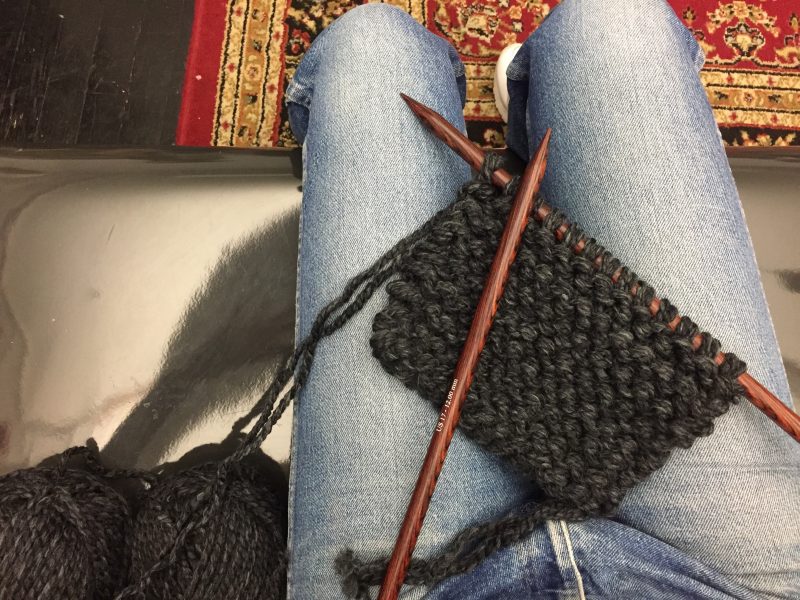 Knitting is a process of taking 1-dimensional yarn and constructing a 2-dimensional fabric. It begins with a single loop, that builds on that loop, and continuously so forth. These loops are considered active. They are tied to the loop that came before it, and the one that comes after it. These series of loops become secure only at the end of the desired form being made, with a single knot. 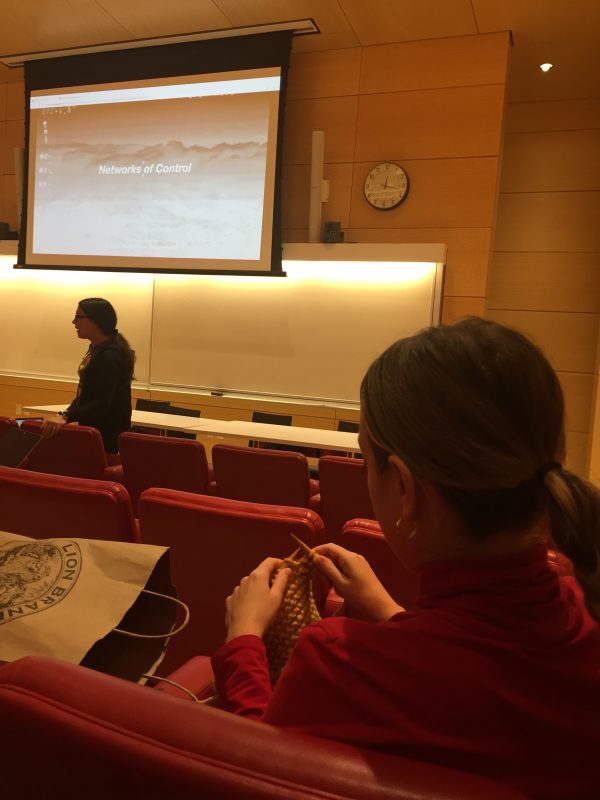 Giving myself a project of making scarves until December is serving as my making-practice for this semester. It is similar to meditation and the negotiation period that happens while building a practice. If every morning you have to decide whether or not you will meditate, you are putting a weight on that decision at the beginning of your day, negotiating the value of that time comparing it to the ‘visible’ tasks of a productive day. But if you commit to deciding you will do it, and you pre-plan the how and where, you can engage with the doing of it, and not the deciding of it. Another example is going to the gym. I have even heard of some people sleeping in the gym clothes, so they’re mind is already made up in the morning. Once we get past the decision to, or not to, we can begin to be-with. In this way, knitting becomes a process of “sympoeisis [which] means ‘making-with’” [1]. I am making-with and thinking-with the wholeness and inter-connectedness of the classroom when I loop the wooly yarn around the bamboo needles. The ing-with is the systemic web of multiple relations we have and hold in our daily human experience. The passage that I have heard myself quote in other areas of my life is, “It matters which stories tell stories, which concepts think concepts. Mathematically, visually, and narratively, it matters which figures figure figures, which systems systematize systems.” [1] Numbers have also been a part of this process. I have made 4 scarves, in 5 weeks. It takes me 4 days to begin and complete a scarf. They have between 18 and 24 loops in width. 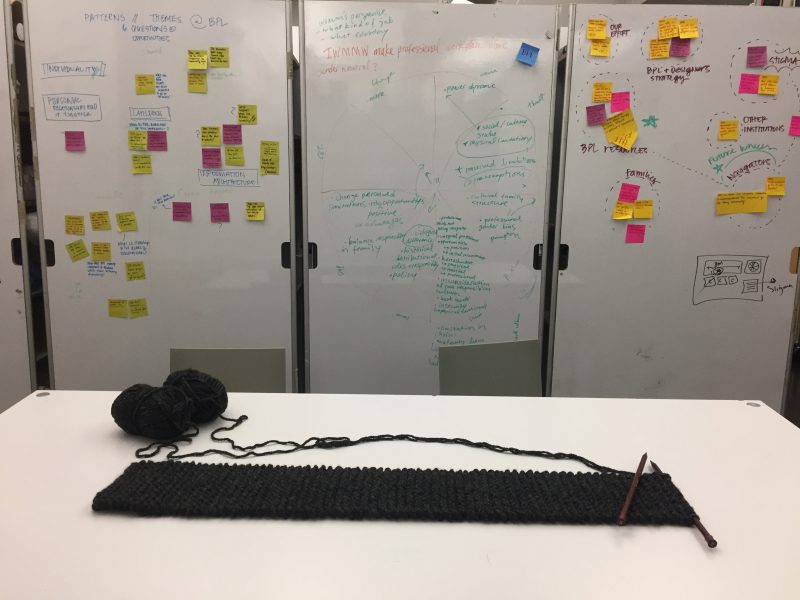 When I’m knitting, I am central in my body, and I’ve noticed there’s less inclination to be else-where. This making-practice and the process of writing leads me to further questions:

How might my body adopt/acquire knowledge through listening and making at the same time?

How might this help me think through other structural forms and their mechanisms and transformations?

What lineage of knowledge am I adopting by practicing an ancient technique?