“It is through processes of symbolic violence that power imbalances are naturalised: “the most intolerable conditions of existence can often be perceived as acceptable and even natural”. The concept describes how ideologies, values and even sensibilities flow through cultural artifacts, systems and practices.”[1]

I didn’t get the chance to canvas this year for the midterm elections.  Starting a new grad program is exhausting (I told myself), but, really, there’s no excuse and the guilt was ever-growing in the days and hours leading up to election day.  I started to rack my brain for creative ways to GOTV from the comfort of my bed at 10pm on November 5th.  Post to social media?  Everyone is doing that, and talk about echo chambers… my friends aren’t the ones who need to be encouraged anyways.  But where was I going to find a captive, responsive, audience? The answer suddenly dawned on me: dating apps. Having been in a committed relationship for the past couple of years I didn’t have the apps on my phone so I would have to re-download them.  I started with Bumble, which has branded itself as the “female empowerment” dating app.  On Bumble, when hetero couples “match”, the woman is the only one who can initiate the conversation.  After that, it’s essentially the same experience as Tinder where each party can freely message one another.

I decided to get in touch with 10 guys that I had previously matched with (back in 2016), asking them if they had already voted or planned to vote in this year’s midterm.  The responses were varied…

Some had already voted: 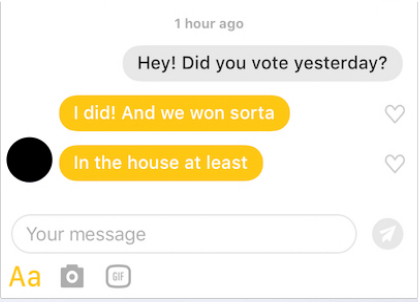 Some weren’t planning to: 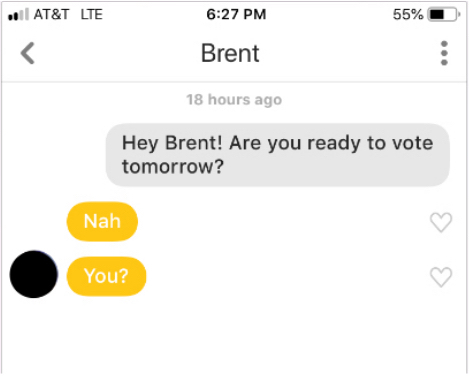 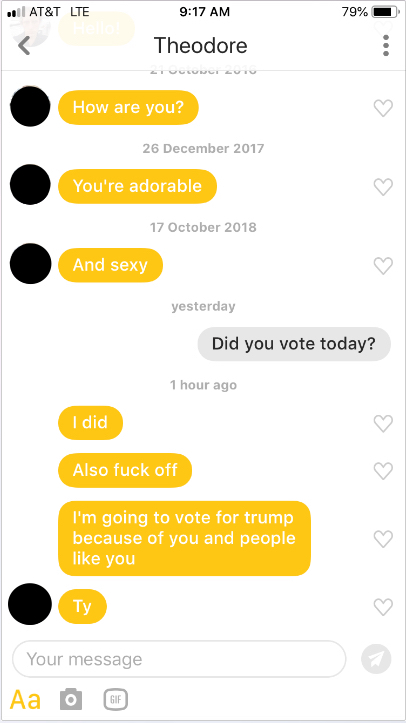 I was certainly appalled by this last response, but I can’t say I was really that surprised.  I’ll admit, I knew this strategy would be like playing with fire in many ways, but what this confirmed to me is that, even in spaces intended to be “empowering” for women, toxic masculinity prevails.

But the story doesn’t stop there.  After receiving the above response, I forwarded it to my friend Leah, who is a journalist writing for Quartz, focusing on relationships and gender bias in the workplace. She was horrified, but also, not surprised.  She asked if she could post it to Twitter. I gave her the go-ahead: 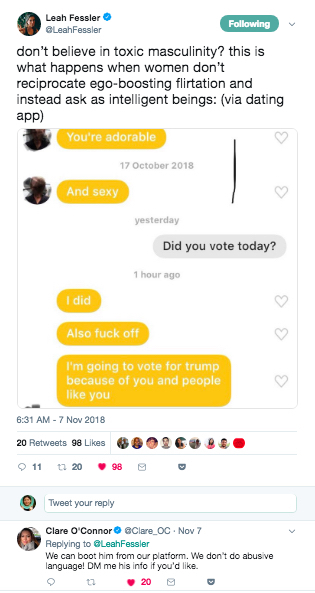 The post immediately drew lots of attention in the form of likes, comments and retweets – mostly women expressing their disgust and frustration. One comment rose to the top – it was from Clare O’Connor, the Editorial Director of Bumble. It read: “We can boot him from our platform.  We don’t do abusive language! DM me his info if you’d like.”  So, we did! We sent her his information, and within the hour his profile had disappeared from the app.

“Bourdieu describes symbolic violence as: “a gentle violence, imperceptible and invincible even to its victims, exerted for the most part through the purely symbolic channels of communication and cognition (or more precisely, miscognition), recognition, or even feeling””[2]

The Bumble experience raised many questions for me.  Most notably questions around gendered spaces, emerging technology and design as symbolic violence.  Even in a product designed by and for women, men can be bullies – there is no real accountability. What if the editorial director hadn’t seen the tweet? I would have had the choice to remain connected with him, knowing he was out there treating other women as he treated me, or, I could have “reported/blocked” him, a centralized procedure that could take days or weeks to go through.

Alex and Dan Tapscott would most likely suggest we solve for these system flaws by building Bumble on the blockchain.[3]  Let’s call it “dBumble”.  It wouldn’t be owned and controlled by a single entity and there would be trust, accountability and immutability.   Through some combination of tokens, reputation scores and governance (voting), the community could theoretically work together to kick out bad actors and keep the ecosystem healthy.  However, what is considered “bad” would likely be defined by the community – the majority of token-holders (users) would need to agree on who and what does and doesn’t belong on the platform.

“Design performs cultural work in ways that booster particular priorities as influenced by the intentions and assumptions of designers as well as those who determine what will be designed.”[4]

The idea of dBumble immediately raises a red flag for me: consider who the designers and users of blockchain technology and applications are today- highly educated, privileged, white men.  If dBumble were to launch tomorrow, this would be the majority of the demographic on there.  Industry experts and blockchain evangelists will tell you the biggest challenge for mass-adoption of blockchain technology is education – most people have very little to no understanding of what the technology is or does, or let alone have ever heard of it.  Can education really solve this problem? History would tell us no. Take the Internet: it is deeply embedded into our personal and professional lives – we couldn’t live without it! – yet most of us don’t really understand how it works. We don’t need to – or so we thought. We flocked to the internet not because we understood it on a technological (or even theoretic or pedagogical) level but because it was solving our immediate problems.  Unbeknownst to us we were being “colonized” – shelling out our data, selling our identities, helping the founders of these now giant tech firms get rich(er). I believe the same thing will happen with blockchain and cryptocurrencies. It will take a crisis – a moment of societal vulnerability and need – for blockchain technologies to be adopted by the masses. And who will benefit from this mass adoption? The white, male entrepreneurs who have 40%+ stake in these networks. As Oliveira says in his Cheat Sheet for a Non- (or less) – Colonialist Speculative Design, “…society has built – and still builds – its wealth upon the disaster of others.”[5]

This is a design problem. As Boehnert and Onafuwa explain:

“Design is a cultural and social practice involved with the production of things, services, spaces and communication that direct human activities. The concept of symbolic violence explains how ideas are reproduced by design. Design encourages people to do new things and think in new ways: it works in the domain of influencing behaviours and sensibilities. As such design often produces and reproduces social and power relations. Designers are implicated with replicating the ‘isms’ often without realising the extent of their own complicity with structural and symbolic violence.”[6]

Throughout western history, white men have been the pioneers and the innovators, bravely seeking out and conquering new territory, and designing new realities. Nothing has really changed today, and that is most evident in the tech industry.  Blockchain technology is Silicon Valley’s new frontier: venture capitalists, banks and other high wealth individuals are pumping their money into this speculative future. A world on the blockchain is quite a seductive, utopic, future – a radically new economic ecosystem built on trust, accountability, and most importantly the decentralization of power. But what’s most seductive about blockchain is the potential, as a founder or token-holder, to make a lot of money.  But, it’s a risk to leave a stable career and join the white waters of this industry, as there’s no guarantee anything will come of it.  So who can take this risk? The very same demographic that could take the same leap of faith during the dot com boom – privileged, white men. Not to mention, these are the people who not only feel confident pitching outlandish ideas, but frequently receive large checks in return. They are the trustworthy, brave visionaries and pioneers.  It’s these new frontiers that are held the least accountable (irony here?) – because the public’s wealth isn’t yet tied in, and because rules and regulations just simply haven’t been made.

“As feminist philosophers Donna Haraway and Sandra Harding have taught us for over 30 years, the bodies through which we produce knowledge matter. Each perspective is situated and partial. Male designers have different sets of interests than women designers. Their points of view and priorities are reflected in their work and then in designed artefacts, services and spaces.”[7]

I could speak (extensively) to the “structural, cultural and ideological reasons which undermine[d] [my] contributions”[8] as a female founder in the industry – how I had to fight twice as hard to get my ideas heard, how I was surrounded by men who interrupted and manipulated me, ignored me at the table, and stole my ideas to call them their own – but I would rather speak to the danger of the speculative projects that I have come across, and the symbolic violence these single-perspective innovations produce.

“While designers address the needs and desires of their audiences and users (as they interpreted them), designers can also perpetuate symbolic violence by embedding racist, sexist, classist and ecoist assumptions into design.”[9]

The criticism shared by me and others is that the proposed blockchain projects are tone-deaf to societies present day needs.  In other words, they aren’t meeting us where we are. Civil, the journalism project that I helped found, has been venerated from inside the blockchain community, but quite negatively received by the journalism community.  From Civil’s perspective, they think the journalism industry just doesn’t understand their radical, industry disrupting idea yet, but the journalists feel disenfranchised. They feel this outside solution is blind to all the progress that is being made in the industry today.  In other words, they aren’t co-designing with the people whose lives will be most impacted by the product.

Alex Tapscott’s opinion piece on voting in the NYTimes, published the day after the election, received similar criticism from experts in the field.  They argued that his bullish argument was dangerous, and that to move to a blockchain-based voting system right now would be irresponsible and potentially disastrous.[10]

“As long as men continue to occupy the majority of positions in the design industry, design as a field will continue to reflect their assumptions and priorities.”[11]

It’s time to realize how dangerous this really is. Again, only one segment of society (and an increasingly smaller percentage of our country’s population) is rewriting history.  The language used in the blockchain industry greatly echoes that of our founding fathers. At Civil we wrote a “Constitution” that was the equivalent of birthing a new nation and economy. The only real difference is that this nation has no geographical bounds.  One day it could encompass the world.

In our political climate today we are experiencing first hand the danger of narrow, homogenous perspective.  This year’s midterms saw the highest voter turnout in 50 years. A huge driver for the Democratic party was to bring equal representation into our government – to elect female, POC and LGBT candidates who can bring their perspectives and lived experience into the room.  Broader, diversified points of view give us a better chance of fair democracy for all. This holds true in design and innovation – to ensure that violence, symbolic or otherwise, will not continue to be reproduced through design, we must invite all voices and perspectives into the conversation from day one.