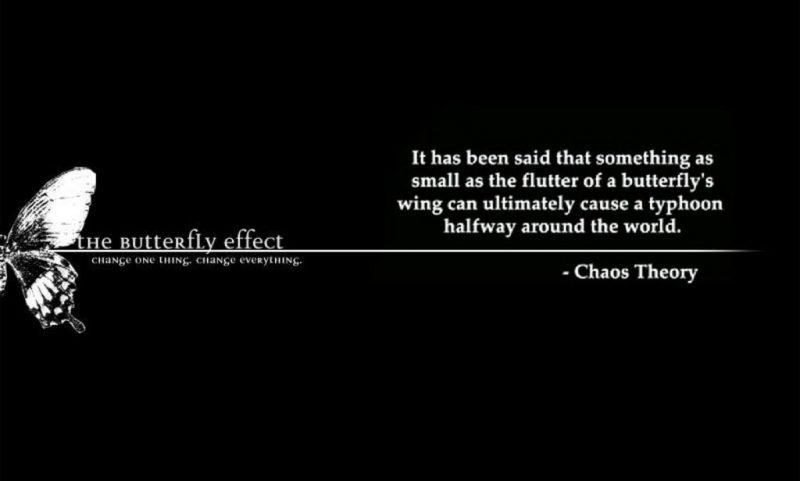 Every decision we make consciously or subconsciously has propelled us towards an entirely different universe. Sometimes we reminisce and wonder, what we would have done differently if we could go back to the past. We live in an endless loop of what could have been, analyzing and synthesizing. We arrive at an answer by collating all those multitudes of situations, yet sometimes we don’t find an answer. But we try anyway. So that if ever faced with a similar situation we could do a little better than what we did in our past. Because we are aware of the magnanimous effect those decisions and choices we make have, in these micro-moments. They hold the capability to change our entire lives.

As a child, I was always fascinated by the concept of a parallel universe. And when I came across the movie “The Butterfly Effect” I was overjoyed. It portrayed beautifully how small decisions could change our entire future. Below are few micro-moments that changed the world history.

I could hardly imagine writing a simple fiction book could lead to a $900 million dollar loss. Or how a simple act of kindness led to World War II. None of us could have ever predicted that a congregation is such minute events led to such a huge catastrophe. This reminds me of a quote by Steve Jobs.

You can’t connect the dots looking forward: you can only connect them looking backwards.

Let’s do a small exercise together…

For a moment, take a deep breath, close your eyes and dive into your memory palace remember your most cherished memory now ponder over the below questions.

It is true, that none of these things happened. Yet, for one second if you could imagine the possibility of the above being true. Would that still be your most cherished moment? My guess, probably not.

Similarly, we all have that those moments we want to change as well

Just one or many missed opportunities. But why now?

Why do you wish to change that now?

It is not like you were oblivious to the conditions when you made the decision. You were always aware about the choices you made. Then what is it that makes you turn your head and question the decisions of your past.

It can one of the above reasons or all or maybe other things that I haven’t listed here. Now imagine ….

I ask you to make a decision

“ So I am thinking about this crazy idea of building something that allows everyone to visualize the results of six years into the future, so they can make the right decisions now. And you are the only person I can think off, who is innovative and creative enough help me in making this idea work. Please leave your current program, job, role..everything and join me in my start-up.”

Would you join me?…. Maybe yes or maybe no

If someone estimated statistically and told you, that I would be successful.

Would you join me?…….. A little more positive answer I am guessing.

But if I showed you, a news channel from the future which featured you and me as the CEO of an amazing company which has the highest profits.

Would you join me?…… OMG, are you still thinking?

The answer now is most likely “Yes”, in a heartbeat. But why? If I am capable of showing you a future with me, then it is highly likely I am also able to show you a future where you are not associated with me. What if …that future shows that you would be the top billionaire without me.

Would you still join me?….. Highly unlikely

Similarly, if I kept adding more crucial information that predicts your success. Your decision will change again. For example…  You will go bankrupt in 20 years on your own, but if you stayed with me you would become one of the richest people on the planet.

That micro-moment of awareness to distance yourself from being enchanted by a situation and being able to access the situation from every direction is what would have allowed you to make the right decision.

Now that I have successfully gauged you in the conversation regarding the importance of micro-moments of decision making. Let’s process to discuss how an encounter with these two small 3-minute video chip almost changed your entire future.

Did that video change your decision? Maybe… But it certainly changed the picture you painted of your future together with me in our start-up.

Can you imagine the power that media entity as a speculation held for that micro-moment?

Speculative Design- The power it holds

Dreams are powerful. They are repositories of our desire. They can blind people to reality and provide cover for political horror. But they can also inspire us to imagine that things could be radically different than they are today, and they believe we can progress toward that imaginary world. [1]

There is a power that Speculative Design wields as a guide to make decisions. In the above extract from the book ” Speculative Everything,” the authors have introduced us to two sides of this coin where imagination can lead to innovation but blindly following these speculations could lead us to dark consequesnses. In the below paragraphs, the authors focus more deeply on the fact that Speculative design is a design tool that allows for the visualization of a parallel dimension. Yet at the same time, it does not mean these notions are unrivaled and neither does it mean that they must be turned into self-fulfilling prophecies.

Design’s inherent optimism leaves no alternative but it is becoming clear that many of the challenges we face today are unfixable and that the only way to overcome them is by changing our values, beliefs, attitudes, and behavior.[1]

Rather than giving up altogether, though, there are other possibilities for design: one is to use design as a means of speculating how things could be— speculative design. This form of design thrives on imagination and aims to open up new perspectives on what are sometimes called wicked problems, to create spaces for discussion and debate about alternative ways of being, and to inspire and encourage people’s imaginations to flow freely. Design speculations can act as a catalyst for collectively redefining our relationship to reality.[1]

Increasingly, our world is guided by speculations. In some capacity, these speculations have led us to manifest them. And complimented with statistical analysis that can be extrapolated to show the increasing possibility of the speculated situation occurring. It not only strengthens the assumptions and but also turns these into a prophecy which is manifested into a reality.

The most prominent example would be the influence of Science Fiction on the current technological advancements.

Example: Influence of Science Fiction on Science and Technology

Below are few examples of Science Fiction elements which have been materialized.

In conclusion, all these examples leading up the fact that Speculative Design has the power to shape the future by influencing our ability to perceive alternate futures through its intervention is micro-moments of decision making. So as to not be blinded by these visions into parallel dimensions and turning them into a self-fulfilling prophecy, one must recognize that these are just options and they need to be carefully designed to give us insight into decision making rather than paralyzing our ability to view through multiple lenses.