November 6th is said to have been a historical day for democracy. Voters everywhere tuned out in record numbers creating a shift that could bring about real change. I wanted to believe it then and still want to believe it now. My election day Day experience was a little different than most, I spent most of the day sending emails and talking on the phone with my home state attempting to get a clear answer as to why my absentee ballot still hadn’t come. I never got a clear answer. I was told that ‘unfortunately it’s taking quite a while to get ballots to out of state voters’ and ‘most of those who got their requests in on the deadline or close to it won’t be able to vote in time’. I had done all that I could on that day but evidently not enough prior. As emphasized by the clerk I was speaking to I should have gotten the request in earlier, after all they do begin accepting absentee ballot requests 45 days prior to the deadline. I had sent my request in 8 days (6 business days) prior. In my home state you must print out an absentee ballot request form, mail it in to be received 8 days prior to the day of the election. The assumption here is that in the 8 days leading to the election the absentee ballot will make it to you by mail and you will return it completed, by mail, to them no later than 12:00pm on election day.

What stood out to me most was the numerous moments of communication throughout that day. I sent emails all over the country asking for assistance, made calls throughout nation including straight to capitol hill via their hotline expressing my desire to vote. All this in a few hours time. I can send a message expressing my vote to one person or to tens of thousands ranging to the local or to the global in a matter of seconds. Yet I can’t leverage that same convenience to actually vote? Reflecting on our reading of Blockchain Revolution the potential of blockchain technology seems most apparent in moments like these. Currently we trust many different central authorities with collecting and recording our votes, all of which eventually make their way to our nation’s central authority that relays the results. The threats to this process are innumerable and require many provisions to see that the information is verified and not lost along the way. The ledger that comprises our record of votes is highly guarded and therefore can only be verified by those we trust to do so. We participate in the exchange of information and trust these authorities adequately exchange the value, much in the same way we relay the information of exchange to a bank and trust that they will exchange the value to the right person.

With blockchain this trust is distributed amongst all those that participate in voting through some advanced computer encryption and validation of that trust through of lots of combined computing power. The convenience of internet communication is still in existence but the ledger that records  the exchange of value becomes public and immutable. To my admittedly limited understanding, your vote goes public without being public through an encrypted public ledger. This ledger is protected by encryption that allows others to see the record of your placed vote complete with who you voted for without knowing who you are. Because the record of votes or ledger is stored amongst all who participate in adding to it, it would require absurd amounts of computing power to unlock the encryption on all the storage locations of the ledger and then change each of those ledgers to reflect a different record of votes. The more people that participate the harder it becomes to do this. This is what makes a blockchain immutable.It’s essentially done with two keys given to each participant, one to encrypt their additions and another to decrypt only the information they’re allowed to see. 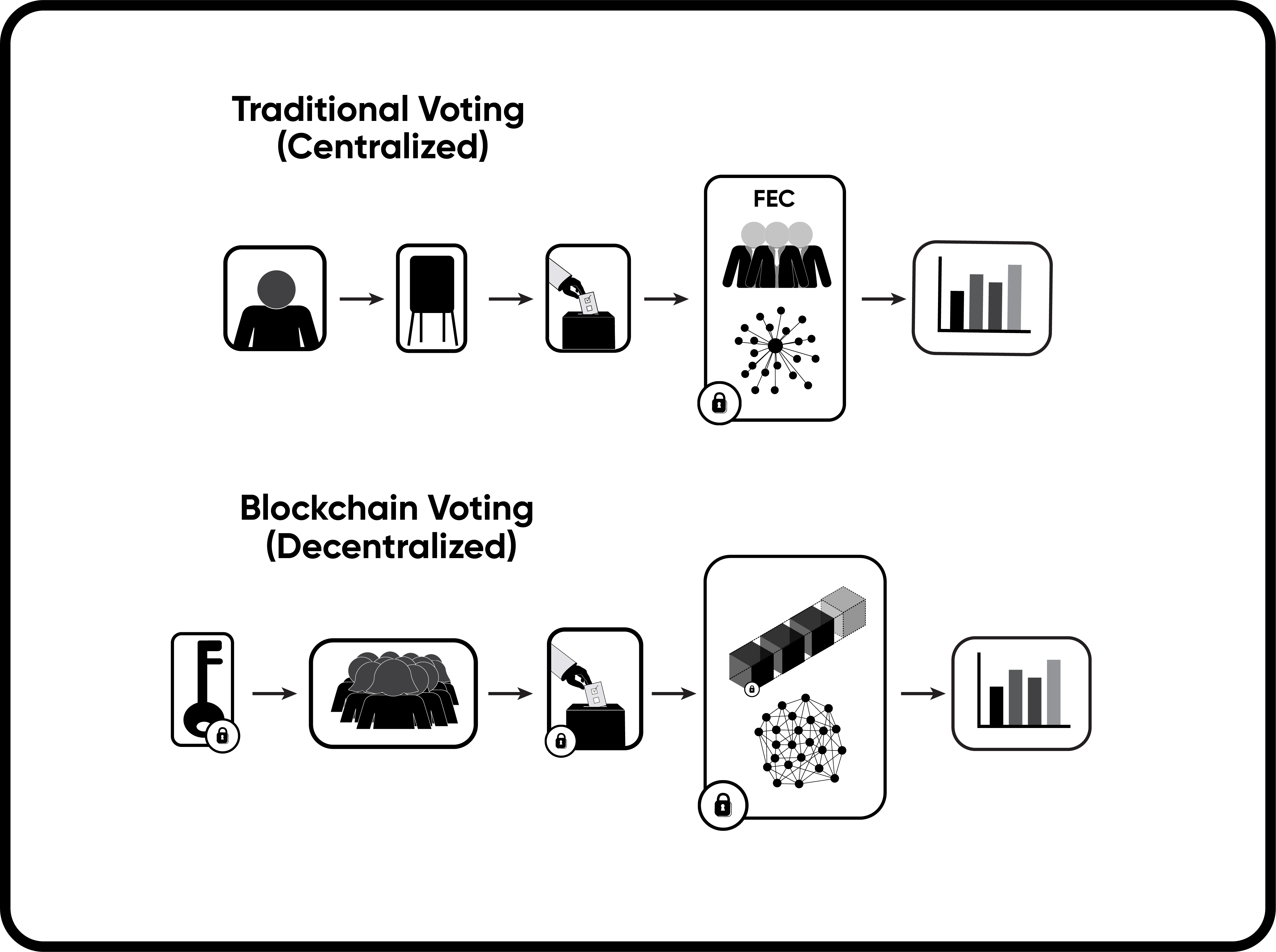 Much like the early days of the internet, widespread adoption of this technology will take time but as highlighted from the excerpt of Blockchain Revolution below surprising steps towards this goal are happening and effecting not just how we vote but how we create policy as a whole.

“In Australia, an organization called the Neutral Voting Bloc (NVB) is using voting on the blockchain to revolutionize democracy in another way entirely. They have a unique approach to government, and it’s optimistic: ‘We believe the best way to fix politics is to participate ourselves.’  Founder Max Kaye describes NVB as a ‘political app’ where interested citizens can register their opinions on policy issues by “voting” on the blockchain. Once the time is up, the final tally instructs elected officials on how to vote in governmental proceedings. When asked, why are you using the blockchain? Max Kaye replied, ‘Because we intend to facilitate a variety of parties, some of them will necessarily disagree strongly. To maintain integrity we need each party to be able to independently verify the voting record, and each vote.’”

It’s time for us to seriously consider the democratic value of placing our votes paired with the convenience of a sending an email. If we are capable of getting our collective voice to allow. My election day was different than most, however,  as I’ve soon learned it’s not an uncommon one. Reports similar to mine were coming in frequently. Voters not able to get their absentee ballots in on time, others alarmed to see signs upon arrival to vote of estimated wait times well beyond the time of the polls closing. If this is our one time to have a say where did we go wrong? Is there someone or something to blame? I don’t have the answers, but it’s relieving to accept that no individual of a collective system has them either. In fact it’s true to our pride and belief in the strength of democracy to see it as a collective system of failings the need of intervention by a collective voicing of the failings and interventions to be better. So in this same spirit might I suggest not looking to the blame but to the intervention of better. That intervention seems to start with the system, a system of which we currently exchange not just information but value. Making the steps toward a distributed internet of value via blockchain technology seems a better place to start than counting on existing systems work out problems as long as we prioritize placing our votes.

What might our democracy look like if the historic turnout of 115,597,500 (49.1%) eligible voters increased to the full 235,714,420 of eligible voters? What might it look like if the participation of that national collective voice didn’t happen once every 2 years but all along the way as policy is crafted?  Ensuring our voice is being heard and represented well by those entrusted with that representation. Democracy seems better served by a continuous well structured intervention of our voices throughout terms than the current mode of our voice intervening every two years, even if we do make the deadline.