A trap of being great 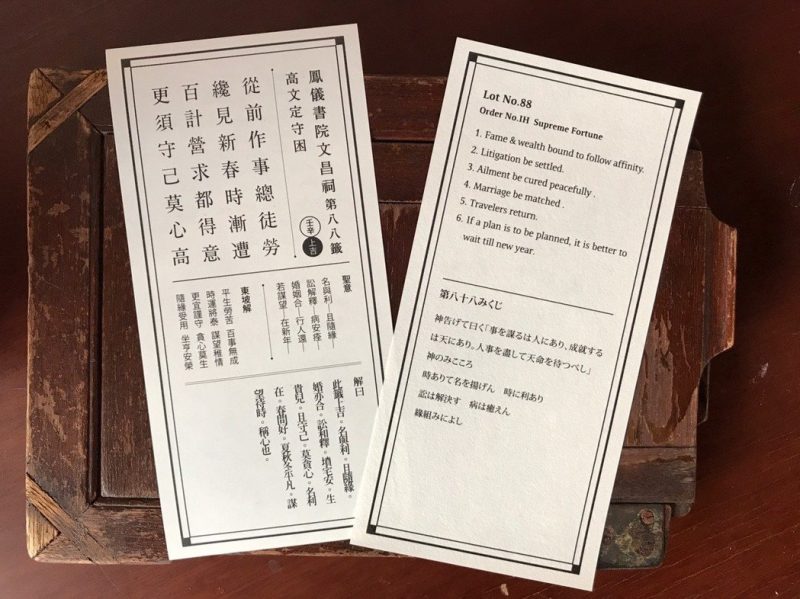 In February 2017, I stayed in Taipei and celebrated Chinese Lunar Year with my family. After we’d had reunion dinner in new year eve, we went to a Taoism temple to worship. In that night, the abbot drew lots for four main groups of occupation– the Shi (intellectuals), the Nong (farmers), the Gong (artisans), and the Shang (merchants) — to prophesy fortune for each group. This classification was established since late Zhou dynasty (1046-256 BC) by Confucian. The order which represents the ranking of contribution to society is idealization. Confucian believe that this strategy of the ruling structure can make sure citizens live well. My mother and I went forward to the altar and see our incoming fortune lots.  She said most Han people expect their children to have fabulous performances at school and that is because, in Chinese philosophy, a person who has excellent knowledge about society is qualified to become a freeman, a man who dominated his life independently. A prevailing thought of that a regular citizen can not decide his fate, which is a trap of Feudalism, is still there in Confucian Asia.

The belief that success can only achieve employing studying hard and becoming intellectuals can be seen as a symbolic violence which mainly established by the education system. Our teachers who represent the intellectuals is also the authority we meet in our growing stage. In the process of growing up, students have to learn how to obey their authority but it turns out that students lose their agency. I’d been a teacher for months in a primary school in 2017 and witnessed how teachers interact with students. That is a relatively new established school in the neighborhood where most students come from savvy families. Their parents are usually software engineers. During the days I worked at that school, I saw that several times when a student, no matter of grade 1 or 6, ask a question which seems less relative to the context that their teacher just said, that teacher neither corrects the student in a way like “you should have this question, it seems like you are not paying attention to what I put it into the word” or “It’s nothing important to our context, don’t interfere others learning experience.”

Without seeking the reason why students ask some less essential questions to them, teachers are under the pressure of every single class objective they are going to teach, which are written on the Compulsory Education Law. Teachers and schools have no room for students to ask a question which these little children think matter.  I’d been surprised that still happened so I asked my students if they have any questions, they have the right to ask. Then other classes’ teachers felt unhappy about my action because after allowing them to do so in one class, these students asked if they can do the same thing in other classes. I can tell that there is a reinforce flow when students faced that their teacher rejected to answer a question and underestimate their intention. Teachers doubt these children have a different point of view from them and quash their inner motivation to learn.

Nor people who have excellent academic performance or people who fail to their tests lose their agency throughout the process of educating. When you earn more score, people praise you. They trust your ability as well as your capacity for making decisions on your own. You are a reliable good person, even though they don’t know what virtues you have. People discriminate poor academic performance and see them as inferior, lazy, unreliable and stupid. If you can earn high scores, your parents will be worried about you and doubt that you can manage your free time to do the thing you want. It turns out that,  more than 2/3 students of Taiwanese starts have the right to arrange their time until they get into college.

Last weeks, I conducted a design research on the topic of self-evaluation. I asked people to imagine if there is “a opposite of myself” and see how might it be. The idea here is to reveal some attributes which you consider is more important to yourself is more likely the attributes you value yourself. When I asked people who are from the best university in Taiwan to describe a person who is opposed to them, most of their answers includes stupid, then I let them describe a life that person lives and make some judgment. Most of them said that people don’t know what they are doing, they have nothing significant to pursue and they are stupid enough to feel happy and satisfied. Those people complained a lot about why they are smart but still not valued by the company or regular people, they feel that they can make an impact but there is no chance for them, and they reject any jobs that don’t require intelligence. It seems like they equal themselves to the smartness. To compare this, I asked some people who are not from the top ranking school. One of their answers shocked me. His name is Chi and he describes that person, Cih, has a normal life which is good. Cih is a teacher, no child, the only worry is the helicopter parent and bossy principal. Chi indeed has a lot of friends and a colorful life so I asked him why he regards normal is good. He said he is substandard and not in line with expectations, which made him feel he is a loser and in fact, he thought he is a loser.

The most ironic face is— we’ve already found the smartest people to legislate our Education Laws and they generated the best solution for the more realistic model of the real educating site. Watching how best solution failed to service each of different person reminds me that, as a designer, to create alternative imaging space for human’s mind is demanding. Even though design thinking is concerned with problem-solving, the problem is not fixing things, we have to reframe the initial question since the problem is alive and sometimes it is hidden in presupposition, like a belief from our culture. I’d like to use design to give form to rethink about the society we live and develop new possibilities within existing systems by centralizing individual for establishing new lens for education.