“It was purely a sequence of events with no consequence on my RL [real life] existence.”

As Julian Dibbell accounts in his article, A Rape in Cyberspace, the cyber rape occurred when the now infamous Mr. Bungle logged onto LambdaMOO, a completely text based virtual reality, and used a “voodoo doll” subprogram to write into the communal text fields grotesquely violent sexual acts as if they were being submitted by other users. Members of the LambdaMOO community were appalled by Mr. Bungle’s actions. Ultimately, they chose to ban Mr. Bungle from the virtual reality, labeling him a psychopath not only for his violent actions but for his inability to view what he did as immoral.

It wasn’t until a T-des student compared Mr. Bungle’s actions to modern video games, that I began to question my own hyper-violent, sexually promiscuous, actions in virtual realities. Being a lifelong gamer and—for the most part—not a psychopath, I have always discredited claims that violent video games make violent children.  But there seemed to be an uncomfortable hypocrisy lurking somewhere in the fact that I committed uncharacteristic sexual pursuits and highly violent actions in the virtual fantasies of video games while denouncing Mr. Bungle’s claim that events in a virtual reality have no consequence on RL existence. So, if events in a virtual world do have ramifications in the real world, what could possibly justify violence in video games? 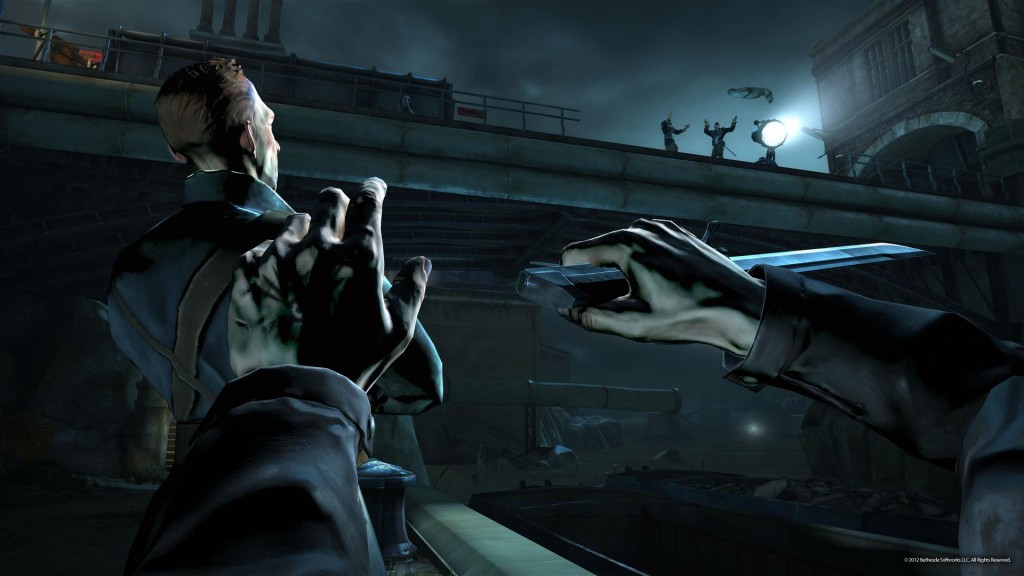 To kill or not to kill…

Studies continue to show that there is little to no correlation between violent video games and spontaneous acts of violence, such as bullying or school shootings. Other studies, however, indicate that those who play violent video games are increasingly likely to accept violent tactics as solutions to problems. This may seem unsettling to some, but I find it oddly inspiring. Not because I promote the use of violence to resolve problems—although I do play a lot of video games—but because this shows that youth are, for better or worse, retaining problem solving strategies that they learn in virtual realities and applying them in the real world. So, while video games do not provoke violence, the situational problem solving skills taught in the virtual worlds of video games appear to bleed over into RL.

All video games revolve around problem solving; whether that problem is solved by pushing blocks into the correct alignment or spraying bullets at a badass corrosive skag until its head explodes, creative problem solving is at the core. It is the players challenge to analyze the scenario, assume the mindset of the character placed in that scenario, and react in the most appropriate manner according to the regulations established in that fictional reality.  The fact that gamers will increasingly utilize the problem solving skills developed in virtual realities proves what powerful potential video games have for affecting RL.

In the instance of my most grievous act of violence in a video game, the murder of an unconscious child, I learned first-hand how the emotional ramifications of virtual morality can affect your RL self. In the virtual world of Dragon Age: Origins, I stumbled upon a village overrun by abominations. Eventually, I discovered that the source of the invasion was local boy who was possessed by a demon. After confronting the demon child I was given two bleak options: kill the child and end this nightmare, or sacrifice his mother in a risky (and illegal) blood magic ritual to expel the demon. I chose the quickest guaranteed solution, killing the boy. But after completing the level and “saving” the village I was taken to the funeral of the child I had killed, forced to watch his grieving mother curse my name and question my decision. Left with an immediate feeling of unease, I turned the game off. I deleted the 14 hour play file. And I started over.

In my second play-through I chose to spare the boy, leaving the village to gather outside help. This time, although it was longer and more challenging, upon completion I felt wholly satisfied with my course of action. I don’t know whether this minute moral insight will ultimately have an effect on my real life problem solving abilities—if you ever run across a demon possessed child, give me a call—but, this virtual experience did teach me that the easiest solution is not the best solution if it goes against your moral code. This virtual encounter allowed me to feel that moment of discomfort and regret generated by violence, even if that violence was justified by legitimate danger. I like to think that insight benefits me in my RL existence, and it was only through violence in a virtual world that I was able to have that experience.

Video games use interactive storytelling to generate immersive empathy—forcing players to confront complex ethical issues, heated interpersonal disputes, and even tense romantic entanglements. Most video games present violent tactics as possible solutions, but thoughtfully designed games pan out the ramifications of those violent actions to produce insights on morality and conflict resolution. Like all media, video games can have significant impacts on how someone thinks they should interact with the world. If done correctly, violence in video games can be used to teach adolescents that violence is not always the best solution to a problem and that negative actions will lead to undesirable consequences. 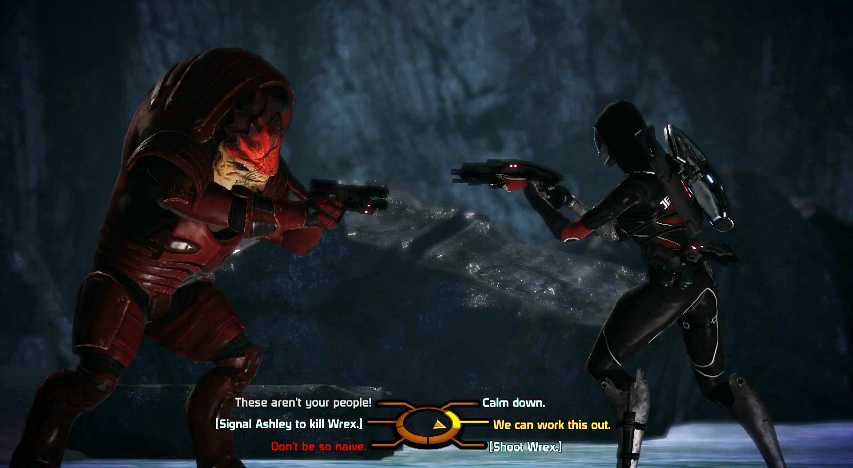 Don’t you hate it when your alien best friend is pointing a gun at your alien girlfriend?

Designers in the 21st century need to be aware of the ways in which virtual worlds can affect our RL selves. Hopefully game designers will begin to acknowledge that virtual worlds have the capacity to shape the personas and actions of players, avoiding rewarding violence for the sake of violence and instead forcing players to thoughtfully confront complex problems and moral situations in ways that would be unachievable in RL. Video game developers who design violence thoughtfully will help to produce gamers who confront violent problems thoughtfully, because, contrary to Mr. Bungle’s claim, events in a virtual reality do have consequence on our RL existence… Which is great, because an anti-social 22 year old like me definitely needed one more reason to take video games seriously.