AT HOME IN UTOPIA – Documentary Film by Michal Goldman

AT HOME IN UTOPIA
Documentary Film by Michal Goldman

In the mid-1920s, thousands of immigrant Jewish garment workers catapulted themselves out of the urban slums and ghettos by pooling their resources and building cooperatively owned and run apartment complexes in the Bronx. Adjacent to the newly opened subway corridor and in the midst of empty fields, they constructed the United Workers Cooperative Colony, known as the Coops, where they practiced the utopian ideals of an equitable and just society. The film captures their epic struggle across two generations as the Coops residents experiment with breaking down barriers of race and ethnicity. At Home in Utopia raises issues of economic justice and race relations that are very relevant to the present circumstances. The film will be followed by a discussion with film director Michal Goldman and Ed Yaker from the Amalgamated Housing Cooperative. This event has been organized by Parsons Housing Justice Lab in collaboration with Parsons Graduate Urban Programs, the Urban Homesteading Assistance Board (UHAB) and the Local Initiatives Support Corporation (LISC). This event is free and open to students, faculty and the general public. 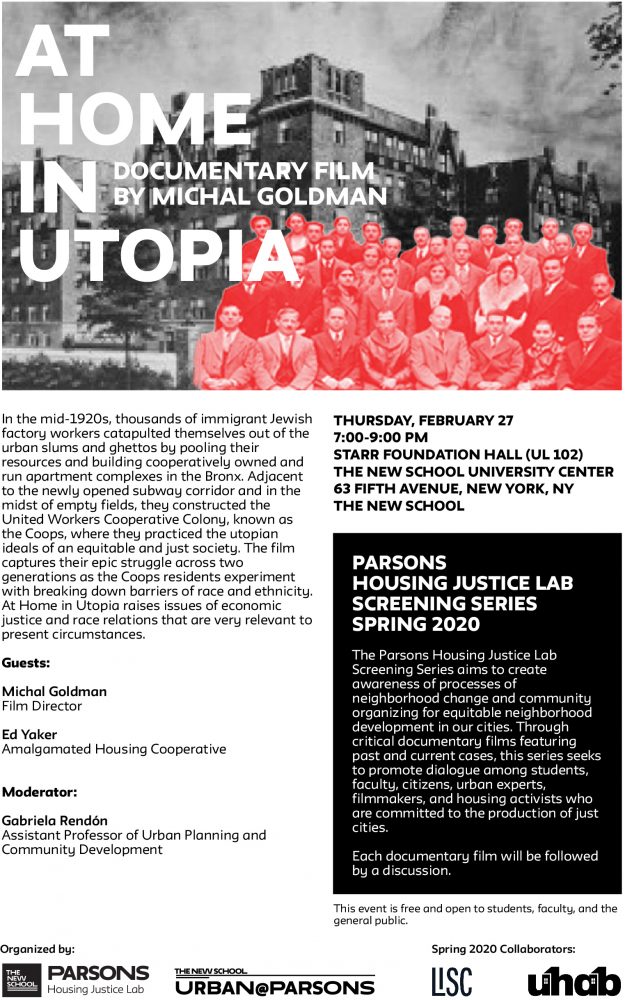