The Future In The Mind’s Eye

Proposal for an extension of the “Taxonomy of Futures” by Stuart Candy: The Future as the perception of Past and Present.

“The essence of perception is dynamic interaction, with feed-forward and feedback influences.”1

For illustrating different possible futures, the designers Dunne and Raby are presenting a diagram which is based on another graphic that was originally created by the futurologist Stuart Candy. They are calling this graphic “A Taxonomy of Futures”. The following few paragraphs contain a proposal for an extension or alteration of both models, while especially building on the original graphic by Stuart Candy. The altered model is extended through the perception of the present as well as the past have to be considered.

While these cones represent different layers of possible futures, they simultaneously describe different kinds of perceiving the present and the imagination of future states based on this perception. Imagining a future state that is probable or likely to happen is easy, because it is probable through what is directly perceived in the present state. However, imagining a future state that is possible in theory, but whose actual existence is not particularly provable through the present state is harder to imagine. These ways of imagining the future are based on the world as it is perceived in the present. Therefore the cones in these graphics are not only depicting possible futures, but can also be recognized as cones of sight of the human eye as it is perceiving the world. 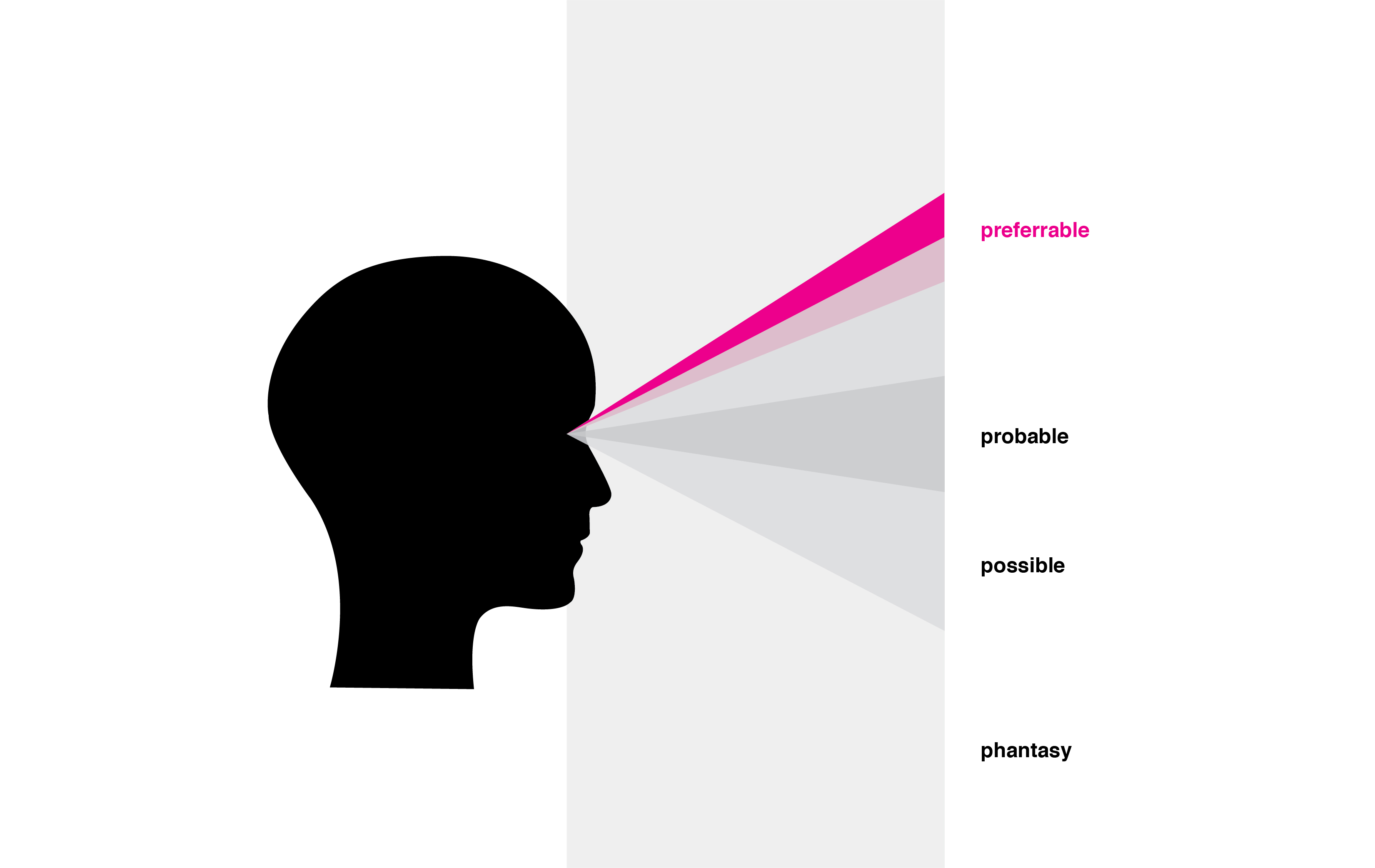 When continuing this theory, the preferable future is different from the possible and the probable future. It is what we would actually imagine to be the best future for ourselves and others and is therefore not based on the objective perception of the world alone. As Dunne and Raby say: ”the idea of preferable is not so straightforward; what does preferable mean, for whom, and who decides?.”3 This preferred future does not only rely on what we know about the world and feasible or unfeasible outcomes based on its constraints through reality, but is also colored by our memories, emotions and desires. Therefore, other than the probable or the possible future states, it is not only the physical eye that sees the world around us – this cone of sight is influenced by our mental activity. Hence, the preferable future is not built by the physical eye’s cone of sight, but the mind’s eye’s cone of sight which is perceiving the physical world around us and the mind’s world simultaneously.

The way in which the mind’s eye and the physical eye interact has been subject to psychological, medical and philosophical research since decades. Today we know that perception is not a one-way flow of information; we are predisposed to understand new information in relation to what we already know. As bottom-up information comes in from our sensory organs and is passed up the hierarchy of analysis, concurrent information moves top down (in accordance with your knowledge, beliefs, goals and expectations) and affects earlier processes.4 Context is crucial for perception of present and future.

Dunne and Raby state that the purpose of speculative design is to collectively define a preferable future for a given group of people. When doing this, the context of the individuals in this group has to be considered, because it has a huge impact on how their mind’s eyes are perceiving the present, the future and eventually the future they prefer. Therefore the “Taxonomy of Futures” has to be extended to the “Taxonomy of Future Perception” as described in this essay.