From hassle to haven

What if the bus provided more than just transportation? How can one's daily commute be a positive experience?

THE PROVOCATION: This project imagines the bus system as an incubator for social change. It proposes three cases studies that provoke new ideas for human interaction.

The bus is a microcosm of societal complexities – thousands of people from all backgrounds rub shoulders and share common space every day. It’s a space ripe with the possibility of innovation, particularly because the cost-to-change is much lower than that of the subway. Thus, this project leverages the bus experience as a way to tackle social issues.

Laying the foundation for this project are speculations of what the future might be. These three case studies imagine a future in which today’s trends are driven to an extreme. There’s mounting pressure to always be productive and connected. The novelty of the sharing economy has pushed so far that everything is commoditized. Crowded public transit exacerbates sexual harassment. Social disparities continue in a vicious cycle.

HEAD IN THE CLOUDS

This case study is born in direct opposition to the grinding pressure to multi-task. The Stillness Bus could provide a haven for harried commuters. Buses would be fitted with individual sensory deprivation domes (that mimic the shape of a fluffy cloud) that each rider puts over their head. The peace and sense of escape provided by this niche service could increase bus ridership, and by making the commute less stressful, people could move through the city with more calm. 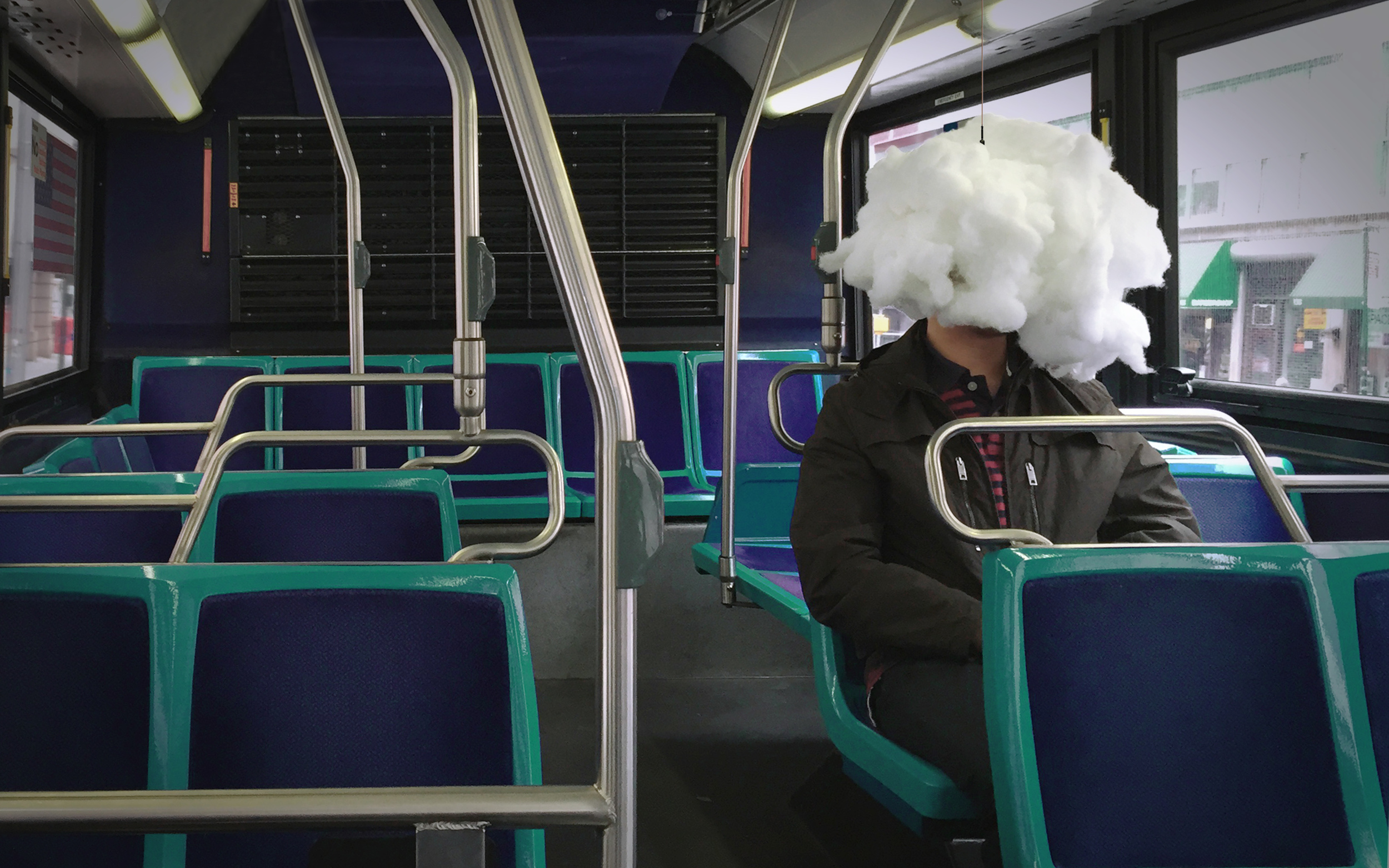 The Bubble Bus evokes the idea of a social airbag in a public place. All riders of the bus would be required to wear bubble vests that pop loudly if someone is sexually violated. The goal is to reduce sexual harassment. Unlike the strategy of segregating genders – similar to the subway systems of Tokyo and Cairo that offer separate carriages to divide women from men – this case study puts the onus on all riders to prevent harassment. The building of physical space between people would be an egalitarian way of developing the bus as a safe space. Additionally, the mere wearing of the vests is meant to ward off unwanted behavior, akin to the effect of posting a home security sign regardless of whether or not the home has the system installed. By empowering safety and confidence of people of minority genders to more easily move through public space, overall mobility could increase.

The Marketplace Bus plays off the ever-growing trend of the sharing economy and pushes it to the extreme. The bus has become a marketplace in which everything is for sale or rent. Want a seat? – buy it off the person who got their first. Want to promote your special massage or postcard writing skills? – get bus riders to pay for your services. This case study envisions an in-bus app that could connect sellers and buyers. Speculating for the exacerbated environment of a commoditized future allows us to explore the extent to which people will commoditize for personal benefit.

What role does provocation play in stretching the realm of possible solutions?

How does one balance blue sky thinking with the constraints of city governance?

How can adding layers to a service increase mobility?