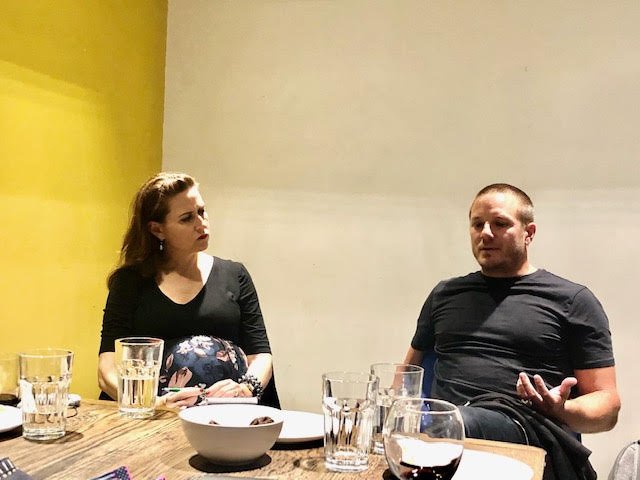 ELAB Fellows had the opportunity to pitch to these established entrepreneurs garnering valuable feedback and insights on their business development models.

Shawn Nelson graduated from the University of Utah.[3] In 1995, he made his first “not-bean bag” from shredded foam camp mattresses. Nelson founded LoveSac in 1998.[4][5] He hired a few college friends who helped him produce the “sacs” until Limited Too ordered 12,000 Lovesacs. Nelson obtained the requested fabric from a factory in China.[5][6][7] He opened the first retail location in 2001.[4][8] Nelson was given the Ernst & Young Entrepreneur of the Year Award in 2003.[9] In 2005, Nelson appeared on Richard Branson‘s The Rebel Billionaire and won a $1 million investment.[2][6][8] He spent three months following the show as acting president of Virgin companies.[10][11] Nelson expanded his company’s products to include a changeable sectional couch.[12][13]

Nelson appeared on Young Entrepreneur Society in 2009.[14] He spoke at the Economy and You forum at Western Connecticut State University in 2015.[1] Nelson earned his master’s degree in Strategic Design and Management from Parson’s The New School for Design in 2015. He became a part-time instructor for the school. That same year, he appeared on the CNBC show Make Me a Millionaire Inventor.[15] In July 2015, Nelson gave the keynote address at the 40 Under 40 awards for Fairfield County, Connecticut.[16]

Alicia Syrett is the Founder and CEO of Pantegrion Capital, an angel investment vehicle focused on seed and early stage investments. She is a recurring panelist on CNBC’s Power Pitch and MSNBC’s Your Business, a Contributor for Inc., and an Instructor at Columbia University. She is a member of the National Association of Corporate Directors (NACD), Women’s Forum of NY, and WomenCorporateDirectors. She currently serves on the Board of the NY Tech Alliance, several company and advisory boards and has served on the Board of Directors of New York Angels and as a Managing Director of Golden Seeds. She tweets @AliciaSyrett.

Ms. Syrett was named as one of the “30 Women in Venture Capital to Watch in 2018” by Business Insider, one of the “25 Angel Investors in New York You Need to Know” by AlleyWatch, one of Wharton’s “40 Under 40” by Wharton Magazine, and one of Virgin’s “Five Next Generation Leaders Emerging from Tech.” She has been featured in Forbes, TechCrunch, Inc., The Huffington Post, Mashable, Entrepreneur, NPR’s Marketplace, and USA Today.  She has also appeared on CNBC’s Make Me a Millionaire Inventor and Cash Crowd, Nightly Business Report (NBR) on PBS, and Fox Business’s Risk & Reward.  She founded The Point 25 Initiative and also wrote a Guide for Entrepreneurs for #MentHERnyc, an event she co-founded.

Prior to founding Pantegrion, Ms. Syrett spent over 10 years in the financial industry, which included her entrepreneurial journey as the first employee and CAO of a multi-billion dollar private equity firm.